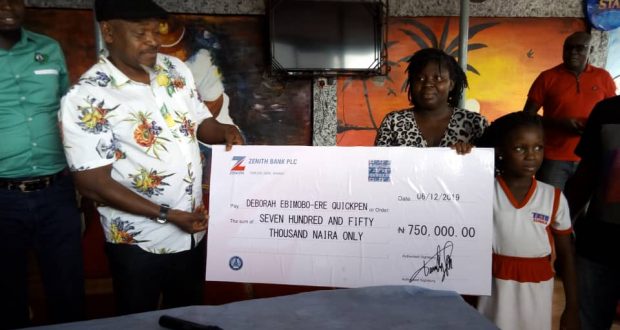 Making the donation in Yenagoa, the Governor-elect, Chief David Lyon said it is ideal to show support to young talents especially when it comes to grooming our future champions, he also added that supporting this kid who is bound on a trip to Namibia for Chess Youth Championship which is coming up in a week time is worth awhile as she is already making the Bayelsa proud by winning medals at the national levels.

Speaking through his representation at the event, a one-time Commissioner of Sports and Governorship aspirant Hon. Ebitimi Amgbare said “this is a way of encouraging the little girl and as a
lover of sports development  himself.
He also said that David Lyon has always been a lover of the youths and a supporter of the less privileged, he was overwhelmed to hear that 7years old Deborah has been contributing to the positive change in the state by winning various medals 9f her category, therefore as a sports lover, the Governor-elect, Chief David Lyon has to step in when the notice of plead was brought to his attention and he had no choice but to support her journey to Namibia to represent Nigeria”.
The leader noted that that education is the key for the proper grooming of the kid to represent the State better.

The kid was discovered by coach Boma and It is recalled that Mr. Gwegwe Ada made a  press statement seeking for sponsorship for the kid to enable her participate at the U-8 Chess championships.

Responding to the kind gesture of the Governor-elect, the convener/ DG of #PROJECT SUPPORT GROUP FOR DEBORAH QUICKPEN, Coach Ada Gwegwe thanked the Governor – elect, Chief David Lyon for his swift donation and went on to plead with him to give Deborah an educational  scholarship.
Mr. Ada also used the opportunity to thank Chief David  Lyon and all those who have contributed in one way or  other in supporting this little girl not forgetting the media houses and journalists who have been very supportive and putting Deborah on the screens and lips of many Bayelsans for her to get to this point.