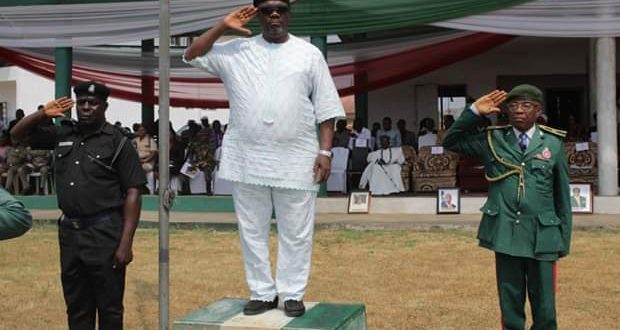 The Executive Chairman of Itu Local Government Area, Barr. Etetim Onuk has honoured Nigeria’s fallen heroes at the 2020 Armed Forces Remembrance Day with a call for support to families of slain military men and women.

The Armed Forces Day is observed annually by nations around the world to honour their military forces.

The event, which is usually held at the federal, state and local government levels, has become a national ritual as military personnel including the Army, the Navy, the Air force and the Nigerian Legion converge to celebrate and give honour to the fallen and living heroes.

In Itu Council headquarter, Mbak Atai, Barr. Onuk and other Services Chiefs, paid their respects to the heroes in a ceremony of laying of wreath.

Speaking at the event, the Itu Council Chairman, who commended the military for their commitment to defend Nigeria’s security, prosperity, and values also appreciated Nigerian leaders for being consistent in the observance of the memorial of our fallen heroes.

” I am also pleased to note that the military has continued to interface with the Police to provide security and guarantee the safety of all Nigerians wherever they may residewithin the country.These gallant men have demonstrated unwavering loyalty in Nigeria’s past and recent political history, and have a clear understanding of its constitutional roles in peacetime and in the nation building process.”

Barr. Onuk further called on everyone, as well as corporate bodies; to take out time to show love and support for service members, military families, and veterans who keep our nation strong and safe.

The Council boss noted that his administration will continue to support members of the Nigerian Legion, Itu Chapter within the available resources to optimize their potentials.

”In our bid to support members of the Nigerian Legion, Itu Local Government Chapter, We have engaged the services of some of their members who are currently assist the Council’s security men. We have also financially assisted the veterans to establish a poultry farm which we believe is still running.”

He pledged to liaise with the incoming Executive Committee members of the National Association of Itu Students (Worldwide) to ensure that Legionnaires children studying in tertiary institutions are given priority in bursary award which is to be disbursed later this year.