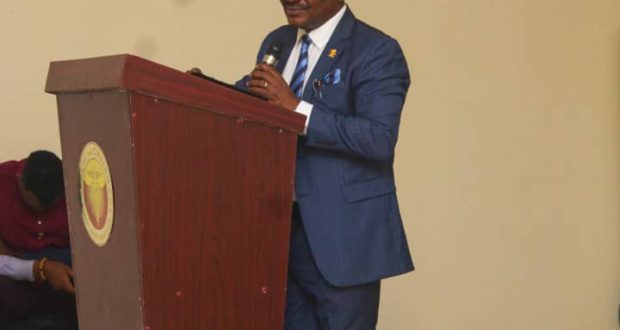 The Honourable Commissioner for Health, Akwa Ibom State, Prof. Augustine Umoh has called on Medical Student to learn clinical skills which is the foundamental of medical studies, to help them showcase their competency after graduation, while balancing politics and unionism to advance their career.

Umoh made The called Saturday, 13th October, at the Nigeria Medical Association secretariat, Uyo, while delivering a keynote address on the Theme: “Effective medical Training and the post Covid Era: The practice and training of competent future doctors” to round up the grand finale of The first ever Health and acedemic summit to mark Naakims Worldwide 20 years anniversary.

Umoh who is a Professor of obstetric and Guynaecolgy expressed delight in the leadership of association for hosting the first ever NAAKIMS WW Health/Academic summit and for successfully celebrating NAAKIMS 20th anniversary in a grand style.

While presentating his address, he harped on the need for intending doctors to be competent, said being vested with the rudimemts of the medical practice will help one restores public confidence in any duty assign to him.

He said as professionals,it is pertinent for them to be part of the decision making process of the state, through politics which according to him give them an opportunity to contribute to the growth of their profession.

he pointed out that, adequate knowledge and competence in practice as a doctor, will equip a one to showcase his potential in politics with the right information, as its will build their capacity and confidence in leadership.

The former NMA Chairman, described the 20th anniversary celebration as a nobel course, that should be supported and sustained, said launching of The association’s maiden edition magazine, “Akwa Medics” is a step in the right direction.

Speaking, Chairman, Hospital Management Board Dr U.David Udo-Umo applauded the leadership of the association for organizing such an educating and reforming summit. He commended Governor Udom Emmanuel for his deep passion for the medical profession hence his continuous desire to improve it standard, and creating more opportunities for employment of doctors within the state.

The medical don emphasized on the need for young doctors to be competence in practical aspect, respect senior doctors in order to learn the nitty gritty involved in the job.

Udo-Umo encouraged NAAKIMSites to be studious and committed to their studies even as they are involved in students unionism, but strived to create adequate balance to ensure remarkable growth in their studies and the magazine production.

Earlier in his welcome address, the Pioneer President/Founder of NAAKIMS WW, Dr Isreal Ben again applauded the leadership of the association for successfully producing The maiden Edition of the association’s magazine and Welcomed all NAAKIMSites who made it to the event.

He noted that the essence of the association was to bring medical students of Akwa Ibom State origin together to enhance unity and share of love. Dr Ben himself, a consultant General Surgeroy, with the University of Uyo teaching hospital.

The former NAAKIMS President expressed worried of the inability of government to sustain payment of medical study grants to students, of which his administration initiated during the tenure of His Excellency Arch Obong Victor Attah In 2001.

Addressing the students doctors on succeeding Through mentorship, Special Assistant to the Governor on Project Monitoring Hon Ekomobong Peter, educated the audience on the need for mentorship while in the process of building capacity and growth. He explained elaborately the role of the mentors and the mentes.

According to him, conscious efforts should be put in place to following up a mentors to enhance adequate mentoring, which he said mentes should grow above their mentors.

Previous: Udom’s Aide Talks tough on students …lambast Teachers for not living up to expectations.
Next: MPM TO GET NATIONAL, STATE EXCO FRIDAY