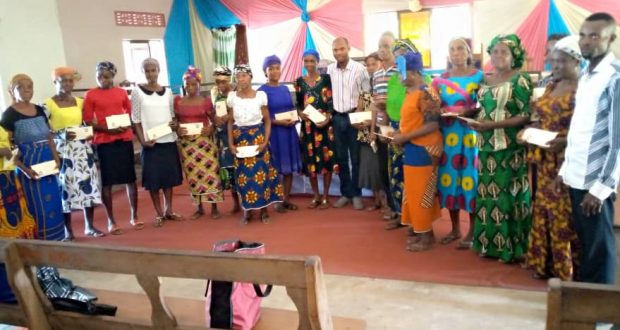 The Founder of Uwana welfare foundation (UWF). An Assembly Pastor with the Apostolic Church, Obio Imo District, Uyo. Pastor U. U Jackson has donated cash sum of 10,000 each to over 21 unemployed widows and orpans in Ibesikpo Asutan local government Area, as part of his empowerment programme to put smiles on the faces of the widows.

Taking reference from the book of James 1:27, the clergy said that the best way of practising Christianity which is pure before God and the Father is to visit the fatherless and widows in their affliction.

He explained that after he visited the Apostolic Church, Three Town, Ikot Nkwo, in Ibesikepo Asutan, LGA. God told him to sow a seed, which today he has come to redeemed it, he disclosed that, by touching lives of widows, with grant they can used to better their livelihood and improved their living conditions. He noted that God has positioned him to helped humanity, and he has been doing it from childhood.

“I’m always inspire my the Holy Spirit to help humanity and I know, is the greatest services I can render to humanity. Seeing the joy in their faces I’m inform to do more. With the very little resources at my disposal, I must reach out to the poor. This empowerment is practical Christianity.” Jackson insisted.

More so, the Ikot Abasi born clergyman, turned philanthropist, had assured that more empowerment are on the pipeline next year as God will give him the grace. said rendering help to the less privilege will help curb terrorism, stealing, child marriages among other crimes and social vices in the society.

The Clergy man urged beneficiaries not to be weary but brace up to overcome challenges ahead of them.
Jackson however called on well-meaning Nigerians to come to the aid of millions of less privileged in the society by sharing part of their wealth for humanity. Noting that anyone who has two things should shared it with others.

On his part, the Area Superintendent of the Apostolic church, Three Towns, Ikot Nkwo, Pastor Emmanuel Ekpo and wife Mrs. Imaobong Emmanuel Ekpo, commended Pastor Jackson for what they described as milk of human kindness, considering the current economic realities hence his magnanimity to the most vulnerable, laying emphasise to the book of Philippi 4:8. Ekpo said any thing that’s good and noble should be welcome, for that reason, him and his family has endorsed in totality the positive strides demonstrated by Pastor Jackson through his foundation.

On their separate remarks, some beneficiaries, Grace Ikpe, Deborah Frida, Bassey Bassey and Joy Akpan said their heart is red, having belong to no political parties, but God still locates them for blessing, consented that truly Pastor Jackson is God sent to humanity, while commending his vision for wearing the garment of giving and caring for the widows and less privilege in the society from his youthful age.

The event took place at the worship Hall of the Apostolic Church, Ikot Nkwo in Ibesikpo Asutan, last Saturday.