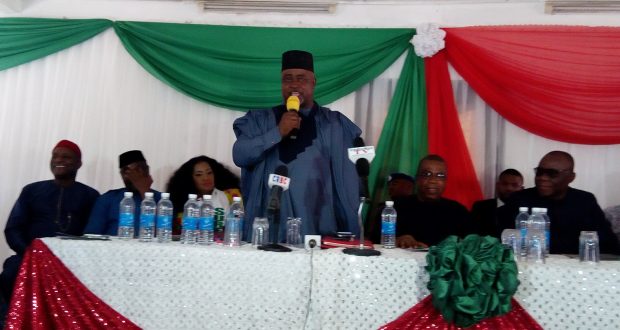 The Chairman of the People’s Democratic Party in Cross River State, Ntufam Inok Edim has said that members of the All Progressives Congress (APC), Labor Party (LP) an non indigenes in Akamkpa and Biase local government areas of the state have endorsed Governor Ben Ayade second term bid.

According to Mr. Edim, this came from the lips of a member of the APC whom he saw shortly before entering a hall which served as venue for the endorsement town hall meeting of Mr. Ayade by the two local government areas Thursday in Akamkpa.

“So, that shows that APC in Akamkpa they are all supporting. The Governor is governor of the state; APC, Labor, Non Indigenes, all sorts of people have come here today to endorse the governor for second term,” said Mr. Edim who vowed that the PDP will not lose the two local government area.

The Chairman praised the performance of Mr. Ayade in office and dismissed insinuations that the party was endorsing him because he was from northern Cross River and according to convention, should do two terms in office.

“What we have to do is to send our children to school so that when the projects start crystallizing kinetically, we will not be having people not to benefit, rather we will be surfing for other states to send to.”

He listed some of the achievements of Mr. Ayade in the constituency to include the procurement of a Pontoon to link Biase east and west; the construction of a Teachers Training College in Akpet central; solar energy electrification in Omon island; a proposed specialist hospital in Akamkpa as well as the appoint of over 100 indigenes from Akamkpa and Biase respectively.