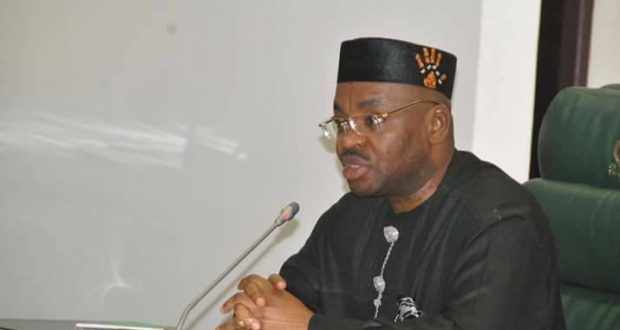 The planned communique against Senator Godswill Akpabio by Akwa Esop  Imaisong Ibibio: Governor Udom Emmanuel’s latest plan to cause tribal crisis in the state
We have refrained from commenting before now on the media war between supporters of Distinguished Senator Godswill Akpabio and Governor Udom Emmanuel because we erroneously saw it as a storm in a tea cup that would easily be settled by the two men. We had the belief that things would cool down after the Governor promised to address the issues of concern raised by Distinguished Senator and elders of Ikot Ekpene senatorial district when they visited the governor last week.
To our dismay, the governor has instead of working to address these issues turned around to sponsor a campaign of calumny against his mentor and benefactor, Distinguished Senator Godswill  Akpabio. He started by unleashing two known political mercenaries, Senator Anietie Okon and Chief Assam Assam to attack the person of Distinguished Senator Godswill  Akpabio whose only offence is to ask the governor to do the right things in Ikot Ekpene senatorial district to make it easy for PDP to win again in 2019. By telling the truth that all is not well is what has brought the Distinguished Senator all these insults including threats of EFCC and imprisonment.
The next thing we heard was the governor paying fifty thousand naira each to Ibibio elders in Uyo senatorial district to sign a communique prepared in Govt House against the Distinguished Senator.
We have it on good authority that the Governor is now using a former military governor, Idongesit Nkanga to get some members of Akwa Esop Ima Isong Ibibio to sign another Govt House prepared communique threatening Akpabio and Annang Nation. As we speak, signatures are being collected for a fee.
With the Governor’s actions, who is trying to create tribal crisis in the state? The answer is definitely the governor and not the Distinguished Senator who has refrained from making further comments on the matter.
We also have it on good authority that the governor is planning to use the police to intimidate some supporters of the distinguished Senator. The Governor is boasting everywhere that the police in the state is in his pocket because he has settled the IG to give him his own CP.
We call on all Akwa Ibom people irrespective of tribe to stop the Governor and his accomplices from plunging the state into tribal crisis and chaos. Governors Attah and Akpabio united the state irrespective of tribe. Nkanga and Anietie Okon whom the Governor is now using are known tribalists who caused the first tribal crisis in the state in 1991 when Nkanga was governor and he used Anietie Okon as his errand boy to fight Dr. Ime Umanah of blessed memory and the Annang Nation. Dr. Ime Umanah’s offence was an appeal at Uyo stadium that news on AKBC TV be also translated into Annang and Oron in addition to Ibibio. Nkanga was very angry, he unleashed Anietie Okon on Ime Umanah and Annang Nation. It is God that saved this state from the tribal war Nkanga and Anietie Okon nearly caused. Remember the story of Nkanga accusing the Annang of planting charm on his chair in Ikot Ekpene. These are the same men that want to cause a fight between the Ibibios and the Annangs nearly thirty years later.
Governor Udom should be beware of Anietie Okon and Assam Assam. They worked as mercenaries for Governors Isemin, Attah  and Akpabio and later turned to fight all of them. Udom’s case won’t be different.
Let us all rise up and stop these men from turning our state into another Benue, Plateau, Delta,  Nasarawa, Taraba and Adamawa states where tribal wars is common. It started like this. This is not about Akpabio. It is about our state.
Adede (Engr) Michael Ekpuk
National President

Previous: FG forges ahead with plans to create cattle colonies.
Next: Ex President Jonathan Speaks Out