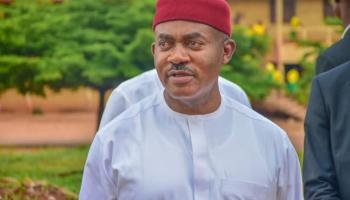 Maduka who had contested for the governorship ticket of the PDP but said he was edged out from clinching the ticket yesterday disclosed his successful switch over and substitution as the now authentic standard bearer of the Accord Party.

In a statement released in Awka by his media office, Maduka thanked his supporters whom he said has given him enough inspiration to move ahead and declared that by their continued support, he will be Anambra’s next governor.

He said he is in the race to correct various administrative errors in the system which according to him has brought poverty and hardship on the Anambra people.

“The truth remains that, this is a task with divine seal and approval. And that was why I was born in abject penury and God lifted me up and as well equipped me for this sacred mission. I cannot bear watching my people continue to suffer due to lack of proper administration and bad governance. By God’s grace and intervention, I have been able to impact the world around me and I am not relenting. Politics or no politics, I will continue to do good to the humanity.

“This time now, I have left the People’s Democratic Party and has joined Accord Party officially. I am the authentic gubernatorial candidate of Accord Party for the November 6, 2021 Anambra governorship election and with your unalloyed support I will be your next Governor.

“Join me, let us transform Anambra State. Let us build a state of our dreams. I have come for the poor like me, those that are bearing the excruciating brunt of poverty and hardship as a result of mismanagement of our common wealth. We are here to correct all those administrative errors this time” he said.