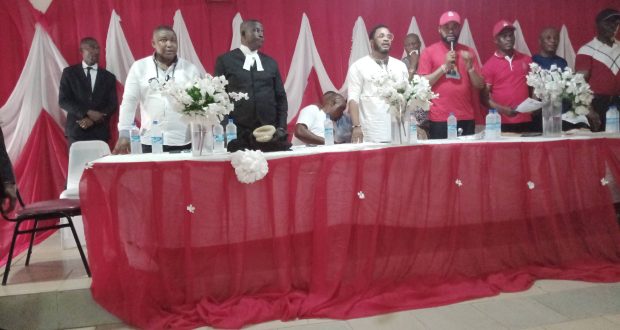 Amb. Peter Daniel Support Network, a Socio political group evolved to further unite and show Akwa Ibom people more love through philanthropy,charity and human capital development in view of 2023 and beyond has inaugurated its Statewide coordinators.

The inauguration which held at Apaiu Hotel, Opposite Ibom Hall, IBB Avenue, Uyo on Friday, December 3, had supporters, friends, well wishers and Chapter coordinators of the group across the 31 local government areas, the three Senatorial districts and all electoral wards in the State thronged the event venue.

Addressing his supporters and newly sworn-in coordinators, Founder of A Touch of Great Glory Int’l Ministry, Uyo , and Progenitor of the Network, Amb. Peter Daniel said he was first moved by the desire to wipe off peoples tears and then impressed by the prevailing peace in the State hence, encouraged to contribute his quota towards peace sustenance, revealing that what God is about to do in the State will bring joy to every Akwa Ibom son and daughter.

” l’m strong in my faith that nothing is so difficult for God to do. What God is about to do in this State is such that will bring joy to every son and daughter of Akwa Ibom. l’m completely in support of what the Governor is doing. I know there is nothing God cannot do,” he intoned.

Amb. peter Daniel informed that he decided as a patriot and public servant to put a structure in place personally for peace preservation, charity, philanthropy and human capital development in total support of the Governor’s Maintain Peace Movement (MPM) initiative and in furtherance of his humanitarian outreaches.

” l sincerely appreciate God for bringing us a Governor who is able to bring peace in our dear State and also working tirelessly to establish more peace in our State. As a humanist, l feel my humanitarian outreaches should be enlarged and taken to a new level. This has necessitated the formation of this network.”

Amb Peter Daniel admonished Akwa Ibom people to not take the subsisting peace enjoyed for granted but at all cost maintain it in view of the fast approaching 2023 General Elections.

He stressed that it was not just enough to admire and enjoy the peaceful ambience created by the Udom Emmanuel Administration but that citizens must be proactive to ensure its sustenance, describing it as imperative to the success of Gov. Udom Emmanuel’s succession plan and future development of the State as subsumed in his Completion Agenda.

He thanked Gov. Udom Emmanuel fervently for evolving peace in the State, even as he pledged to return love to his supporters whom he said have stood by him with so much passion and love.

Also speaking, the immediate past State Chairman of Accord Party and former Chairman and prominent member of Inter Party Advisory Council, IPAC, Hon. Joseph Itiaba commended supporters of the Network for making out time from their busy engagements to come and honour Amb. Peter Daniel vis-à-vis their massive support.

Hon. Joseph Itiaba said the essence of their coming is to change their narratives, revealing that the motive of the Network is not for the progenitor to enlarge his already large economic coast, but for the supporters sake, whose narratives he described as ugly.

He commended Amb. Peter Daniel for his milk of human kindness which he said he has passionately displayed through his various humanitarian outreaches, describing him as ‘one in search of more capacity to assist Akwa Ibom people who are in dire need.’

Hon. Itiaba who dubbed politics a game of interest, harped on the need for Akwa Ibom people to support someone who will transform their lives even as he described Amb. Peter Daniel Support Network as a Mass Movement.

Hear him:” You’re here in your own interest. Let us rise up and say, enough is enough ! You’re mature enough, nobody can decide for you. We want it to be a mass movement,” he revealed.

High point of the event was the presentation of three different awards from groups and individuals to Amb. Peter Daniel for his large heartedness and love towards the less privileged as well as a thrilling song presentation from an ecstatic group.