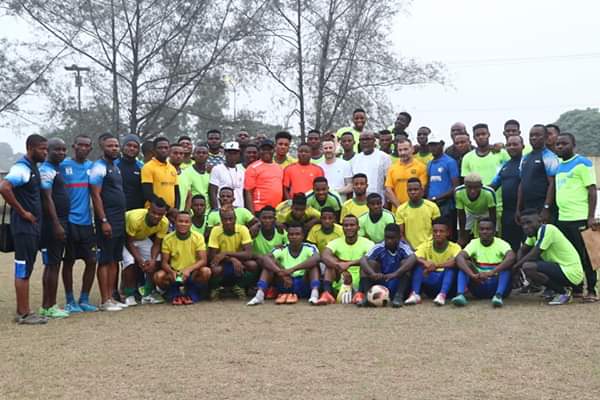 In furtherance to the ideals and the ideologies where ALGON BOYS FC was founded, of which her major aim is to create employment as well as means of economic empowerment to the youths.

Based on these ideals, 5 players are set for trials in some top clubs in Africa and Europe, Spain and Morocco to be precised.

This is possible courtesy of the partnership arrangement between DreamChaser Event/Sports Management, in conjunction with CharlesAnn Sports Management companies with the management of the Algon boys Fc which saw the duo of soccer agents , Garreth Purges from UK who is scouts for Huddersfield and Tino. El-trada from Mallorca , Spain hit uyo last week to personally run the assessment of young talent where the likes of Peter Daniels (Goal keeper) Saviour Polycarp ( Defensive
midfielder) Joseph Bassey (Right full back) Godnews Paul and Victor Etim both attackers met the expectations of the delightful Scouters who were satisfied with the reflexes and the agilities of the players.

The five selected players ,while answering questions from the press men thanked God for making their dreams come true, they thanked the leadership of Algon in the State for giving them this platform while pleading with them to make this dream a reality as they are now faced with visa problems which could hamper their proposed trials abroad.

The General Manager of Algon Boys, Hon John Ekpenyong in his remarks appreciated Hon Frank Archibong for his dedication and commitment to the economic empowerment of the youths.

He also expressed gratitude to Hon NSE Essien (Indomitable) for the huge financial support he gave in making sure that the foreign scouts were adequately taken care of,as he played host to scouts while visiting his team, FC ONE ROCKET of Onna.

He further stressed that such activities of selecting players will be a reoccurring decimal even as he hinted that the next batch of foreign scouts are billed for uyo this week Saturday the 25th of Feb, 2019.