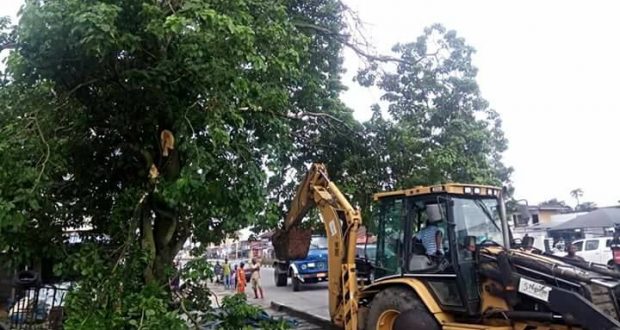 Akwa Ibom State Government has pulled down three shanties on Abak Road,Uyo, suspected to be hideouts for criminals.

The structures located under a tree close to Ibom Plaza, were demolished today with the tree cut during this month’s Statewide environmental sanitation. A resident of Abak Road, Ubong Moses described the shanties as headquarters of criminals who gathered there to share loots.

He said apart from being criminals’ den, the shanties had been a refuse dumpsite which posed health hazard to public.

A lady who claimed to be a victim of the criminal activities in the area, said the demolition was long overdue as she was allegedly robbed and raped under the felled tree. Previous: 52 year old woman sleeps with her son every Wednesday to sustain his wealth
Next: Buhari calls for repatriation of stolen assets without legal hurdles