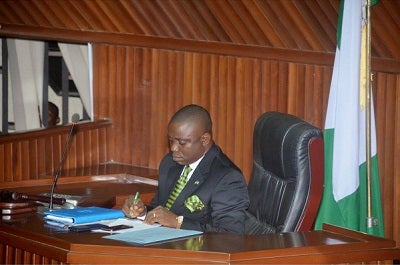 As the Elected Members of the Akwa Ibom State House of Assembly are making preparations for the inauguration of the 7th Assembly on Monday, 10th June, 2019, the public is hereby alerted to a new dimension in the orchestrated plot to diminish the stature of the Member-elect for Ibesikpo Asutan State Constituency, Rt. Hon. (Elder) Aniekan Uko, before millions of Akwa Ibomites who love and adore the lawmaker.

The fatuous and asinine minds that created the falsehood simply want to de-market and demean Elder Uko, having seen that defeating him in any free and fair contest is a tall order.

The most recent fabrication is the earpiece advert on The MAIL Newspapers, obviously sponsored by a spurious group, “Concerned Akwa Ibomites”, for an obtuse purpose, which an insider divulged, that, the aim is to portray the Honourable member-elect of Ibesikpo Asutan State Constituency as a desperate politician who sees the Speakership of the 7th Assembly as a do- or-die affair.

As absurd is their wild, spurious and mischievous ear-piece advert, we have received reliable intelligence that the pseudo-group have concluded plans to sponsor and circulate a good number of ‘devilish work’ and articles on other local tabloids and social media platforms on Monday.

It has become imperative to clarify to all Akwa Ibomites that, the said advert begging for support for Aniekan Uko is neither emanating from our stables nor coming from any of our support groups.

The good people of Akwa Ibom, young and old, are smart enough to see through the machinations and clandestine moves of these evil men. The dubious people will never succeed.

However, it is disheartening, wicked, malicious and shameful for disgruntled politicians to embark on such level of insidious innuendoes simply because of the fear of the rising profile of Elder Aniekan Uko.

We state again that Aniekan Uko did not, will not and cannot ask anybody or group of persons to advocate for him to become the Speaker of the Akwa Ibom State House of Assembly on the pages of newspapers.

However, assuming but not consenting that Uko is lobbying to become the Speaker, intelligent people know that the Speakership of the House of Assembly is the exclusive privilege of the Elected members to determine and not some political group, real or imagined.

We wish to appeal to the good people of Akwa Ibom, Members-elect and colleagues, the leadership of the LEAGUE OF NEWSPAPERS PUBLISHERS, INDEPENDENT PUBLISHERS ASSOCIATION, Coalition of Online Publishers, Akwa Ibom State(COOPA), Security Agencies and other related groups to please discountenance the said advert as it does not and can never represent the position of IBOROAKAM and his Campaign organization.

We wish to state unequivocally that Elder Uko is more concerned about, and focusing on his avowed responsibility to give Ibesikpo Asutan in particular and Akwa Ibom State in general (in concert with other legislators) a desirable voice in the 7th Assembly in making people-oriented laws and attracting dividends of democracy as it were to the constituents.

Noxious minds can still have a change of heart!