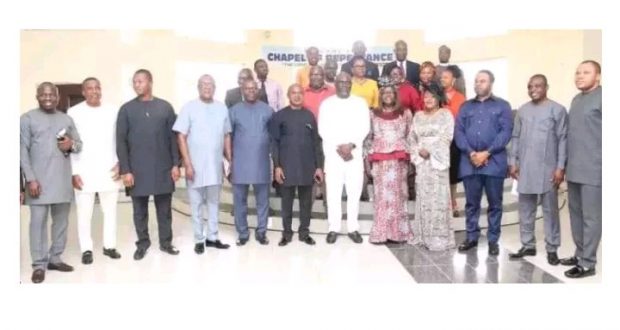 The Speaker of Akwa Ibom State House of Assembly, Rt. Hon. Aniekan Bassey, who maintained that it was a privilege to thank God, has charged elected members and staff of the Assembly to be agents of love, peace and unity sued for love and unity for the progress of the state.
Rt. Hon. Bassey made this known on Monday during the maiden monthly Thanksgiving Service of the 7th Assembly at the Chapel of Repentance, Assembly Complex, Uyo.
Speaking further, he said “Our emergence was borne out of the grace of God. Seven stands for perfection and we must keep to this. I believe in the tenets of Thanksgiving. Our Inauguration was the most peaceful in the history of Akwa Ibom State House of Assembly. Let’s work toward the progress and betterment of Akwa Ibom State and the administration of Governor Udom Emmanuel.”
He thanked his colleagues for their role in his emergence as Speaker and pledged he will work to justify the confidence reposed in him, saying “they gave me their shoulders to lean on.”
The Speaker lauded Governor Emmanuel and stressed that the 7th Assembly, under his watch, will collaborate with the Executive arm of Government to develop the state.
In her remark, the Clerk of the House, Mrs. Mandu Umoren, lauded the leadership of the 7th Assembly, particularly the Deputy Speaker, Princess Felicia Bassey, for securing a brand new photocopier for the Chapel and called on other Members of House to assist in equipping the worship centre.
In his exhortation, the Chaplain of the Chapel, Pastor Ekwereobong Etim, who centered his sermon, “Peace be Unto You,” around Isaiah 3: 10-11, John 14: 27, 1Peter 5: 14 and 2Thessolonia 3: 16, maintained that the 7th Assembly will experience peace and all round success.
He admonished Members to always acknowledge God in their daily endeavours and noted that peace cannot be bought with money, as it remains a divine gift.
Those who also attended the service included Hon. Mfon Idung (Ika/Etim Ekpo), Dr Charity Ido (Ukanafun), Hon. Udeme Udotong (Abak), Barrister Otobong Bob (Nsit Ubium), Hon. Ifiok Udoh (Nsit Ibom), Rt. Effiong Bassey (Oron/Udung Uko), Hon. KufreAbasi Edidem (Itu), Victor Ekwere (Mkpat Enin), Hon. Asuquo Nana (Ikono), Hon. Okon Frank (Mbo), Hon. Godwin Ekpo (Ibiono Ibom), and Hon. Anietie Ekah (Uyo).