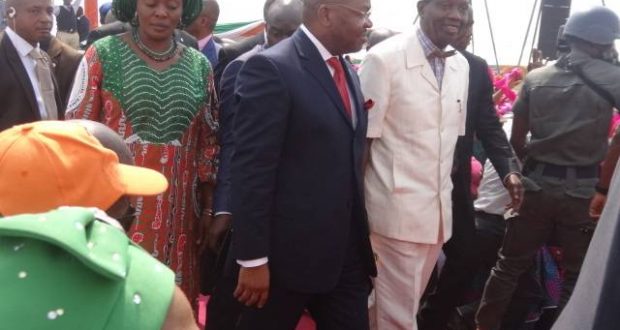 As part of his commitment to ensure Akwa Ibom -a state named after God- reflects its spiritual essence, the State Governor, Mr. Udom Emmanuel has scheduled Sunday, January 21, 2018, for the groundbreaking/foundation laying ceremony of the 8,500 Capacity International Worship Centre to be located at the Commercial Layout, Udo Udoma Avenue, Uyo.
The Akwa Ibom State Government’s contribution to the International Worship Centre project includes payment for the design as well as provision of land and site preparation.
The project is also expected to be funded through voluntary donations from religious bodies, Non-Profit Organizations, individuals and so on.
The event will provide the Commissioner for Housing and Special Duties, Mr. Akan Okon, whose Ministry is saddled with the responsibility of supervising the project, the opportunity to give details of the Worship Centre in perspective.
As site preparation for the Worship Centre is in top gear, Mr. Akan Okon, who was physically present at the site has reiterated that the Gov. Udom Emmanuel-led government’s commitment to projects that will bring sustainable development to Akwa Ibom and its people.
Speaking to reporters at the site, the Housing and Special Duties Commissioner said the administration was making strategic efforts to transform Akwa Ibom to a true destination of choice that would go a long way to restore its the lost glory.
Mr. Okon further said that “the project is a positive change which is very much desired by all. It is a unity ground for all Akwa Ibom sons and daughters”, adding that the Worship Centre, which will be a worship place for all denominations, will not just be a spiritual hub for the country but for the continent and beyond.
2018-01-19
dozzier