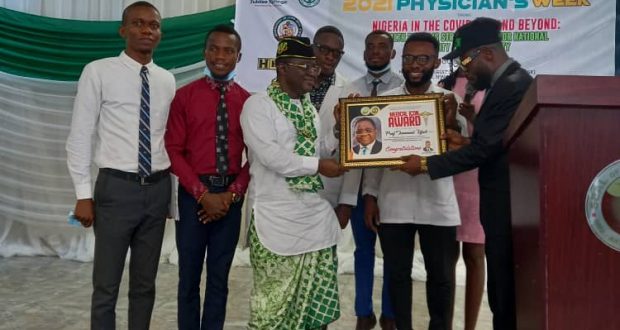 ….Commends NMA Chairman for a successful hosting of the physician week.

The Worldwide president of medical students Comr, Utomobong Udo explained that the award was an honour to Prof Ujah in recognizing The role he has played in training Medical student and developing young doctors over the years and the for his effective leadership Capacity since assumption of office.

The number one student doctor, who have received commendations from all strata of medical department in Akwa Ibom State of his leadership acumen within the period under review, appealed to the State Chief Executive governor Udom Emmanuel to look into the issue of medical grants for medical students, noting with the hash economic realities,they should be supported by the government to put in their best to be able to replace their senior doctors after retirement.

Utomobomg stressed that, the body has written to His Excellency through the Ministry of education and Health, hoping and believing that his students will smile again before the end of the year.

The President also commended Akwa Ibom State branch of NMA ably led by Dr Ime Sylvester Udoh, For making the state proud at all time, and for a successful hosting of the 2021 physicians’ week, appreciated all members for their continuous sacrifices in saving lives, and encouraged them not to give up in their mentorship roles for the upcoming doctors.

Responding, The National President of NMA Prof Innocent Otobo Ujah mni thank The leadership of the Akwa Ibom Medical Student for the honour done on him explained that he values the gesture and will never take it for granted.

During the event, NMA Secretariat was officially commissioned by the The Former president Goodluck Jonathan and Goodwill message by Chairman NMA Akwa Ibom State who is a Patron of The Association and the the National publicity Secretary of NMA Dr Aniekeme Uwah himself a former Chairman of The NMA,Akwa Ibom State.

High point of the occasion was a keynote adress by former President Goodluck Jonathan, and The Chairman SeplatEnergy Dr A B Orjiako as well as panel discussion by The Commissioner for Land&Water Resources,Pst. Umo Eno,Former Vice Chairman of Exxon Mobil Mr Udom Inoyo among other top dignitaries. The week long celebration Will officially come to an end today.

Previous: FG Moves To Recover Over 40% of Uniuyo Encroached Land
Next: Governor’s Aide Tasks Corps Members to be Role Models to Students … calls on parents to provide basic school needs to their children