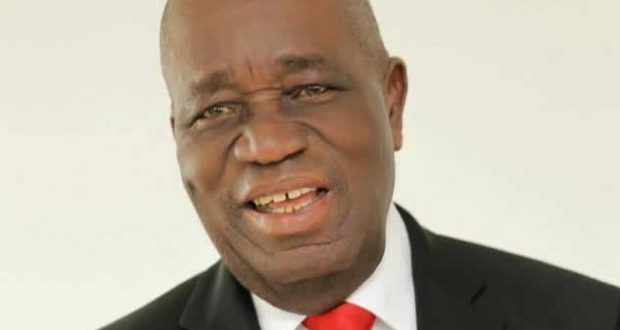 … as they Gather to Praise God’s Faithfulness

The people of Itu local government area gathered to return praises to God for victory given and faithfulness in the just concluded 2019 general elections in in the state during a victory Thanksgiving/monthly solemn assembly in the Council Hall, Mbak Atai Itam.

The gathering which was tagged, “Great Is Thy Faithfulness” witnessed a mighty turn out of religious leaders, stakeholders and the youth Corp members who filled the atmosphere with songs of praise

Speaking at the event, the Deputy Governor of Akwa Ibom State, Mr. Moses Ekpo admired the massive participation of clergymen, political stakeholders, traditional fathers and the people of Itu for finding time to praise God together. Represented by a permanent Secretary in his office, Mr. Nkopuruk Ekaiba, Mr. Moses Ekpo acknowledged a better representation of Itu people in the government owning to their belief in the “ONLY GOD”. Using a biblical allusion, the Deputy prayed for continuity of progress for the Itu and by extension, Akwa Ibom State.

In his address, the Executive Chairman of Itu local government area, Hon. (Barr.) Etetim Onuk in his speech thanked God for standing by him to succeed in his office. He also thanked God for the Governor of Akwa Ibom State, Deacon Udom Gabriel Emmanuel for his successful return to office as a second term Governor.

The Chairman used the gathering to intimate the people of the area of his achievement so far as the council helmsman, “apart from our infrastructural development drive, this administration has embarked on a massive renovation and beautification of the council Secretariat and premises. The Chairman’s office, security village temporal Legislative Chamber, conference room, office spaces, Kennedy Ekong’s hall and infact, this hall we are seated in is a clear testimony of the many transformations that have taken place since”. He explained steps to further bring development to the local government area, “we are about signing a Memorandum of Understanding (MoU) with Hongye-Amip Concept Limited for the establishment of a trailer Park at Uyo Itam, which will put to and end the menace and nuisance associated with indiscriminate parking of trailers and other articulated vehicles at Ntak Inyang. Discussions are also on for the construction of Slessor Works and SPA, which will serve as a recreational resort to be located at the old Council Secretariat. Barr. Onuk explained more of his achievement in the area of Trade ad Investment, Health, tourism, power supply among others.

The Council Boss also acknowledged the effort of the governor in extending his development activities to the area, “we remain eternally grateful to his Excellency, the Executive governor of Akwa Ibom State, Mr. Udom Emmanuel for making Itu one of the industrial hubs in the state. The establishment of AKEES Mini Industrial park at Ikot Ebom Itam with six number medium scale industry and the recent granting of certificate of occupancy to Hendai Investment Company Limited for the construction of an industrial Park in Ikot Andem Itam; while a conglomerate of 26 different industries speaks eloquently of the governor’s determination to extend his industrialization revolution to Itu local government area”.

In his message to the people of Itu local government area at the event, the member representing Itu State Constituency in the seventh Assembly in the Akwa Ibom State House of Assembly, Hon. KufreAbasi Edidem expressed his appreciation to the people of Itu for their massive support to PDP during the 2019 general elections. He particularly thanked the people for giving him the mandate to represent them in the state Assembly and promised effective representation as well as his availability and accessibility for the people at all times. He sued for contributions and suggestions to move the Constituency to a desirable height.

The event featured prayer of thanksgiving, word ministration by the council chaplain, Rev. Joshua Cleopas, praise and worship, song rendition by Itu choral voices, goodwill messages. A cross section of professionals and political class from Itu attended the ceremony including Itu Media Professionals’ Forum (IMPF) led by Pastor Saviour Ekpe. Others who graced the occasion were the Vice Chairman of Council, Mrs. Emem Ekpanya, Leader and members of Itu Legislative Council; Itu Head of Service, Directors and staffers of the local government area as well as members of the public.

Previous: FG Goes After Emmanuel Ekon Over Withheld Assets
Next: UCCDA set to relocate to Permanent Secretariat after 31 years