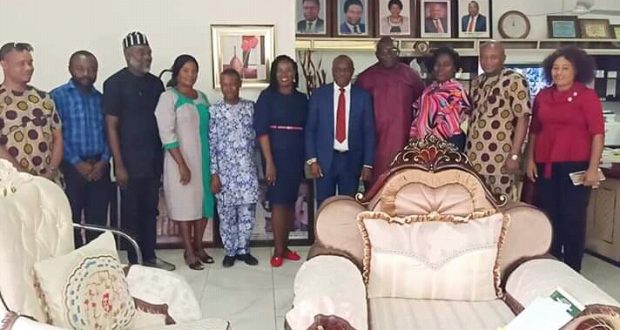 The Accountant General of Akwa Ibom State, Pastor Uwem Andrew-Essien has commended the State Chairman of the Nigeria Union of Journalists (NUJ), Comrade Amos Etuk for the steps taken so far to nip in the bud the unethical practices of quack journalists in the state and enhancement of professionalism in journalism practice.

Pastor Andrew-Essien gave the commendation on Wednesday when he received members of the State Working Committee (SWC) of the NUJ who paid him a courtesy visit in his office at the State Secretariat, Uyo.

The Accountant General maintanied that the commitment of Amos Etuk led NUJ to make it impossible for non-professionals to practice as a journalist is a true reflection of his integrity, credibility and regard for the public interest.

Describing Journalists as critical stakeholders and dependable allies in the affairs of the state in view of their role of information dissemination, Accountant General congratulated Comrade Amos Etuk and his executive members on their victory at the August 2, 2019 NUJ elections in the state and prayed that the tenure of Etuk “will bring greater glory to the NUJ.”

While expressing appreciation to media professionals for their support to the programmes and policies of Governor Udom Emmanuel led administration, he hinted that Akwa Ibom remains a leading state in the areas of prompt and regular payment of workers’ salaries, assuring that gratuities of 2016 will be paid fully before the end of 2019.

The AG disclosed that his office has successfully published the accounts of the state from 2015 – 2018 and that the 2019 edition will be published next year.

He maintained that Journalists are free to approach his office to verify issues relating to financial information to ensure that truth, objective, fair and balance stories are reported about his Office.

“Feel free to come to my office on a fact finding mission.It pays to be honest.Please, let information put to the public be verifiable,” the AG appealed.

Pastor Andrew-Essien who pledged his readiness to sustain his cordial working relationship with the NUJ in the state, noted that the visit by the new executive members of NUJ was another opportunity to further strengthening the already existing relationship he has with Journalists in the state.

Earlier in his remarks, the Chairman, Nigeria Union of Journalists, Akwa Ibom State Council, Comrade Amos Etuk said the determination of his administration to tackle quackery in journalism and enhanced professionalism in journalism is aimed at restoring integrity and respect to the noble profession.

Comrade Etuk informed the Accountant General that training and retraining of Journalists in the state form the cardinal objective of his administration.

He pledged the Union’s readiness to work in partnership with the state government to ensure the fulfilment of its “Completion Agenda” and stressed the need for government at all levels to always carry Journalists along for professional reportage of its programmes to the global community, describing Akwa Ibom project as a collective one.

Etuk said they were in AG’s office to chart a course for the state and to thank the AG for always supporting the union and to encourage him not to relent.

The NUJ helsman spoke of the welfare of members which he said remains a cardinal objective of his administration.

He, however, used the opportunity to solicit for the support of the Accountant General towards the successful hosting of the 2019 NUJ Press Week slated for December.