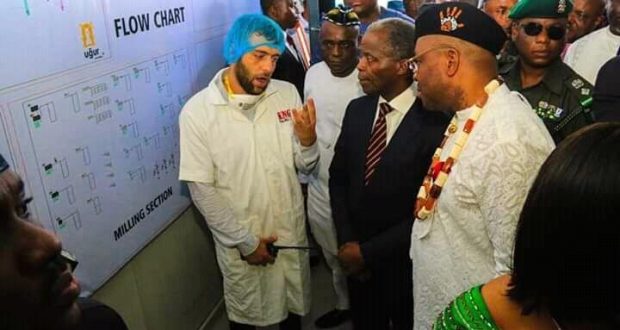 He declared, “I urge you to be dreamers; dream of broad, tarred and lighted streets in our towns and cities. Dream of industrial estates dotting all over our country-side; dream of blooming economy where our children will receive qualitative education and full employment there after”.

Thirty three years after, Akwa Ibom people led by their fourth civilian governor, Mr Udom Gabriel Emmanuel, are enjoying the fulfillment of these dreams. They are witnesses to the realization of the Akwa Ibom Project under a visioner whose refreshing perspective to governance has turned the switch on innovative ideas that push the limits of job options available in the State, opened business opportunities in small and medium scale manufacturing, food production, agro-allied industries and other social services.

Right from 2015, when Gov. Emmanuel took office, he set out to fullfil the yearnings of the founding fathers, which were to make the State self sufficient, peaceful and prosperous. He has rightly encapsulated these desires in his five-point agenda where he promised to create wealth, alleviate poverty, create jobs, consolidate and expand infrastructure, and ensure economic and political inclusion.

One of the strategic initiatives which he chose as a pivot to achieve these five points development agenda was industrialisation. However, he is not pursuing industialiasation alone but also building support systems that will create an environment for industries to survive. In addition, he has set out to develop consolidate on development of the three gateways into the State, which are, air, land and water. Today, everyone whether an Akwa Ibomite or an alien can see, feel and testify that the economy is growing rapidly following the establishment of more than 16 industries so far.

All these have earned Akwa Ibom State a place on global industrial map. There is also is the St. Gabriel coconut oil refinery and plantations which together with others is transforming economy of Akwa Ibom State far beyond its contemporary and steadily weaning itself from a federal allocation dependent and civil service-driven economy into a multi-industrial hub, with great ambitions to become a reference in various economic sectors including aviation and maritime development in the Gulf of Guinea.

Despite the milestones he has recorded, Gov. Emmanuel is not resting on his oars, but continues to paddle rigorously as he captains the State on a voyage to liberation. He has developed an entirely new aviation sector from a rudimentary flight services he met on ground and is exerting effort to get the Ibom deep seaport and the Liberty Oil and Gas Free Zone started. The administration’s commitment to actualize the deep seaport and adjoining industrial cities linning the entire stretch of the State’s coast is an ambitious feat that is worth celebrating too.

Indeed, Akwa Ibom state has come a long way since September 23, 1987. The State has evolved from the ‘hinterland’ it was called into a preferred destination. At 33 and with a governor such as Mr. Udom Emmanuel, the State is on an uninterrupted journey to Uhuru.