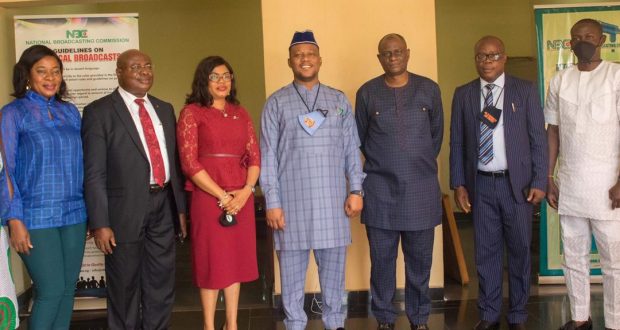 AKSG TO PARTNER NBC FOR MARKETING THE COMPLETION AGENDA

Akwa Ibom State Government is to partner the Nigeria Broadcasting Corporation, NBC for effective reportage and marketing of the completion agenda.

The exercise is aimed at utilizing all available channels of communication at the disposal of NBC to project the second term Eight-point Completion Agenda of Governor Udom Emmanuel, geared towards turning Akwa Ibom into an investment destination.

Akwa Ibom State Commissioner for Information and Strategy, Comrade Ini Ememobong, made this known earlier today in Uyo, during an advocacy visit to the Uyo Zonal Office of the Nigeria Broadcasting Corporation, NBC, located at the Information Layout, off Information Drive in Uyo, the Akwa Ibom State Capital.

Comrade Ini Ememobong said, as a fast growing destination of choice in Nigeria for tourists and investors, it becomes expedient for the government to partner the Broadcast regulatory body for effective reportage on the potentials of the State reiterating that such collaboration will provide channels of communication to be harnessed for greater benefits.

The State Information helmsman who commended NBC for its regulatory role in the Nigerian broadcast industry and for ensuring that media content conforms with laid down rules however charged the organization to come out with clear distinction between monitoring and censorship of Programmes.

To this end, the Commissioner called for a a review of the broadcast code to accommodate present day realities while also providing an avenue to parley with media content producers with a view to sensitizing them continually on the dos and don’ts of the industry towards gathering their inputs for the much needed amendment of the broadcast code.

Emphasizing that one of the hallmarks of democracy is freedom of speech, Comrade Ememobong stated that in a democratic setting such as ours, contending ideas must be allowed to thrive together therefore, the NBC must not be perceived as infringing upon the right of Nigerians to be heard but ensure that they are heard in a way and manner which does not affect public sanity.

He applauded the long hours the NBC invests in watching and listening to broadcast stations in execution of her monitoring mandate and saluted the management and staff of the Uyo Zonal Office for their commitment to duty.

The Zonal Director described the visit as a sign of better things to come and expressed the willingness to partner the State Government while reiterating NBC’s commitment to professionalism in the discharge of its duties as it has been performing so far.

He lauded the State Government’s industrialization efforts and thanked the Information Commissioner for recognizing the good works of NBC so far while noting that there is room for improvement even as he expressed the willingness to do more in the coming year in terms of sensitization and regular interaction with industry practitioners as well as stakeholders.

Mr. Henry Asagba seized the opportunity to appeal to the state government to rehabilitate the access road to the NBC zonal office – Information Layout – which also provides access to the News Agency of Nigeria (NAN), National Communication Commission (NCC) and the Federal Character Commission (FCC).

Highlight of the visit was the presentation of a publication of the Ministry of Information and Strategy, Akwa Ibom Impact to the Zonal Director of NBS by the State Information Boss, Comrade Ini Ememobong.

Previous: The Journey Towards a Greater Uyo Begins… Chairman-elect Inaugurates Transition Implementation Committee
Next: DON’T KILL YOURSELF FOR ANY POLITICIAN – UDOEDEHE