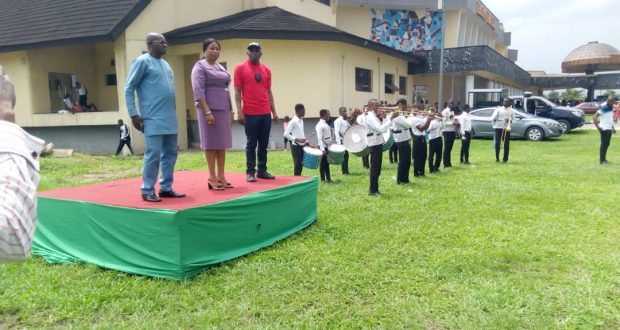 The Akwa Ibom State government has called on the National Association of Proprietors of Private Schools (NAPPS) across the federation to be vigilant and put in place safety measures to safeguard Nigerian children and provide a conducive environment for learning.

Commissioner For Education, Mrs. Idongesit Etiebet made the call on Tuesday, October 12 during the 2021 National NAPPS Day held in Ibom Hall, Uyo.

Etiebet, who spoke through the permenant secretary lady Rose Bassey, said in the last few years, Nigerian children have had a fair share of the insecurity challenges that have continued to ravage the social fabric of the country, which has manifested in form of kidnappings, killings, raping, and so on in schools and at home.

She expressed hope that the ongoing concerted efforts of the state governments through adequate funding and recruitment of teaching staff to schools will eventually yield a positive outcome in stemming the tide of violence and kidnappings currently being witnessed in some schools. Etibet stressed that schools and homes must remain vigilant and ensure all safety procedures are in place.

She thanked Governor Udom Emmanuel for his proactive approach in repositioning the education sector in the state which has also assisted private schools to function effectively.

She said, “I express my profound gratitude to God for giving us a God-fearing leader, the chief driver of Industrialisation, a transformation fountain, a free and compulsory education sustainer, a lover of quality education, Mr Udom Gabriel Emmanuel.”

She commended the leadership of NAPPS in Akwa Ibom State led by Pastor Udofia Davies for the robust synergy, collaborative and concerted efforts to address some challenging problems concerning the education sector in the state.

The education boss,Mr Udeme udofia, Speacil Assistant to the governor on education monitoring explained that insecurity is a major threat to our education system in the country, noting that all hands must be on deck as proprietors and security operatives should strategically fight insecurity as a matter of priority to ensure that schools are safe for children and teachers. She also called on parents to monitor closely the movement of their children/wards and the company they keep.

In his address, the National President of NAPPS, Chief Yomi Otubela appreciated members of NAPPS for their continued commitment despite the current spate of insecurity in the country.
Otubela called on the government at all levels to put machinery in place to secure the learning environment by increasing police surveillance on schools throughout the nation to reduce the level of kidnapping.

The leader of NAPPS called on the government to also consider teachers’ welfare in the private sector by allocating grants to private schools to cushion the effect of rising inflation on the private education sub-sector which he said has already been hit by the impacts of the COVID-19 pandemic.

Earlier in his welcome address, the state Chairman of NAPPS, Pastor Udofia Davies said the Theme for this year’s NAPPS Day: Curbing Spate of Insecurity, Way forward for Education in Nigeria was timely, considering the level of the kidnapping of students.

Pastor Davies called on proprietors of private schools to avail themselves of the opportunity given by NAPPS through Bank to obtain loans to upgrade facilities in their schools as the body will clamp down on operators of unregistered schools with a view to checkmate proliferation of substandard schools in no distant time.

He maintained that NAPPS is the only body that the state government through the ministry of education recognises as the umbrella body of all operators of private schools in Akwa Ibom State which they collaborate with on matters bordering on the private school sector.

The high point of the occasion was march past, cultural dance, presentation of trophy and prizes to the deserving winners.