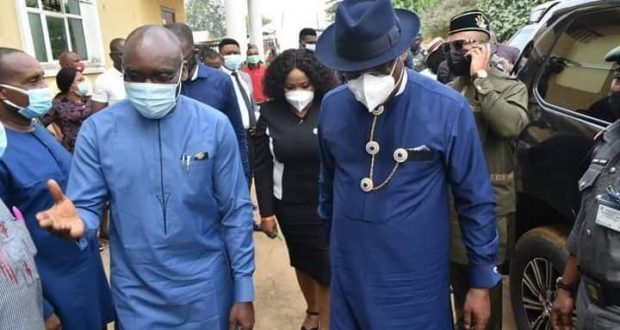 This development arose from an issue bordering on the communities trespassing into the school plots of land, which the provost assured the communities’ leaders, prompt action will be taken to address which was at the verge of causing a rift between the host communities and the college.

Welcoming the visitation team, the Provost described the visit as a fact finding visitation explaining that the only source of water for the host community, the proposed drains empties into the community stream which has infuriated the host community, causing a ‘supposed rift’ in the relationship between the College and its host community. Appreciating the timely visit, he appealed that something should be done in that direction.

He seized the opportunity to thank the governor, Mr. Udom Emmanuel, for his recent appointment of new Principal Officers as well as a new Chief Security Officer to the College.

In his words, “This well-researched appointments have given a face-lift to the College in both academic and administrative procedures, especially now that the College is transiting to a degree-awarding Institution. I would like to present, to you the immediate needs of the College as matters for your consideration as follows:

“The College parameter fencing is quite necessary and urgently needed to stem the tide of insecurity on campus. Right now, Communities around the College make the College their thorough fare. College property is not safe because of insecurity arising from lack of parameter fencing. When this is completed, the crime rate would be reduced on campus. It will also ensure the security of students as the hostels would be put to use anytime soon.

“The only road in the College that one can point at, is the main road that leads to the Central Administration building from the main gate. Others could best be described as footpaths which make access to lecture halls difficult particularly when it rains. Construction of internal roads will open up the College and meet one of the important conditions for granting full accreditation to the College.

Other matters tabled before the team by the Provost were,

He furthered that the cost estimate to meet the requirements for full accreditation status is N234,772,160.00 (Two Hundred and Thirty-Four Million, Seven Hundred and Seventy-Two Thousand, One Hundred and Sixty Naira) only.

He furthered that the College Health Centre is presently housed in few rooms in an apartment meant for Security which has not operated and cannot operate in full capacity.

In his words, the present students hostels are not habitable at all. The College, being non-residential for students has impacted negatively on the students’ population. This, also makes it difficult to market the College, Dr. Daniel disclosed.

The hostels, if renovated and adequately furnished, would improve Internally Generated Revenue (IGR) base of the College, increase students’ population and make marketing of the College easy, especially with the dreams of His Excellency about the College becoming Akwa Ibom State University of Education.
“The cost estimate for the hostels’ renovation is 16,250,500.00 (Sixteen Million, Two Hundred and Fifty Five thousand, five hundred Naira) only, which has already been forwarded to His Excellency.

The institution boss informed that there is no cafeteria on campus for both staff and students as they need decent and hygienic food served in a good cafeteria.

“Health, they say is wealth. Provision of a good cafeteria would equally attract more students to the College and increase IGR base. The cost estimate for construction of the proposed College cafeteria is N58,851,168.75 (Fifty-Eight Million, Eight Hundred and Fifty One Thousand, One Hundred and Sixty-Eight Naira, Seventy-Five Kobo) only.

On release of take off grant for the Degree Programme, Dr Udo said, “The first batch of degree students are in year two. By May this year we would have new intakes, but without commensurate increase in facilities and the staff strength to meet up with the recommended staff students ratio. The take off grant would be used as stabilization funds to increase facilities in the College for the degree programme.”

“They are all working with passion and high level of commitment to the College business since assumption of duties. They need to be encouraged to keep up the spirit by providing them with official cars as soon as possible, since they met none on ground. The Chief Security Officer, in the light of the nature of his duties needs a Hilux Van to penetrate the interior of the College to supervise his men. Again, the Provost needs a Hilux Van as a back up vehicle for his security men,” he submitted. He implored the assistance of all in the realisation of all the issues presented for consideration.

Present at the visit was the Chief of Staff to the Governor, Hon. Akparawa Ephraim Inyang -Eyen who led members of the entourage to the College of Education. He assured that there is no going back by Governor Udom Emmanuel on his determination to upgrade the College to a Degree Awarding Institution.

He assured that a comprehensive and detailed review of all the challenges faced by the institution will be submitted to the Governor and announced that, Governor Emmanuel has already directed that construction of internal roads in the College should commence immediately.

The Provost later conducted the Visitation Panel around the College to see for themselves and have first hand knowledge of the environmental and structural problems earlier reported to the State Government by the college provost.

Officials of the Institution who were present at the parley include the representative of the Governing Council Chaiman, Obongawan Mandu Abia and other members of the Council of the College, Deputy Provost Academics, Dr Esther Andrews, Deputy Provost administration, Dr. King Ibritam, the Registrar, Barr. Augustine Udoibit, Dir. of works Arc. Otu Umoren, Directorate of information, Mr. Ekomobong Udoh, management staff and members of the Students Union Government.