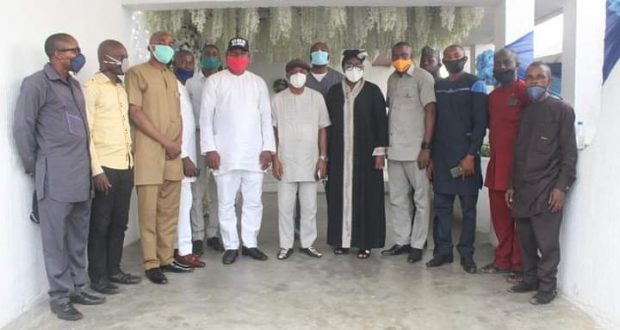 He informed that the management received the news of passage of the former Governor, with a rude shock and sadness, as he exited at the peak of his drive to contribute to the completion agenda of Governor Udom Emmanuel and transformation of the South South Region of the Country.

Conveying the condolences of the Governing Council, Management, Staff, Students and the entire College Community over the sudden demise of their beloved husband, father, brother and one time Governor of Akwa Ibom State who established the College in 1991,

“Late Air Commodore Idongesit Nkanga, Idongesit Akwa Ibom as he was fondly called had over the years contributed in no mean measure to the building of the College, State, South-South Region and the Nation at large.

“In recognition of his immense contributions to the development of the College, the College at its 7th Combined Convocation conferred on the Late Otuekong an award of Honour. It is however gratifying to note that many people nurtured and mentored by the Late former Governor have excelled in their various fields.”

The letter of condolences presented by the provost to the wife of the deceased informed “the family should take solace in the fact that the deceased has left behind worthy legacies of hard work, commitment and discipline which are time tested virtues, qualities and pillars of a successful leader whom he was, which must be sustained.

“In acknowledgement to his productive and fulfilled life and also praying for God’s abundant grace for the bereaved family, the state and the South South in this trying times, we earnestly ask God to grant the entire bereaved family the fortitude to bear this great, very painful, irreparable and irrecoverable loss, it stated.

Responding, Deaconness Funmi Idongesit Nkanga, wife of late Air Commodore Idongesit Nkanga appreciated the institution for their unrelenting wish to come and condole with the family.

“I welcome you all. I thank you because you found it expedient to honour and show love at this time.

“When you see people appreciate others even in dead, it tells a lot and we are not taking it for granted.

“You have shown that charity begins at home, it is the love that matters. God of love will show you love individually in all areas of your lives, thank you,” she said.