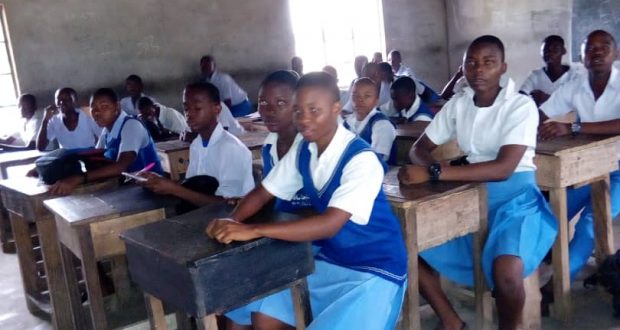 In his efforts to checkmate activities in public primary and post-primary schools in the state, as well as making government received value on all money spent in the educational sector, the Special Assistant to the governor on Education monitoring, Akparawa Elder Udeme Udofia is leaving no stone unturned in making sure the best academic training is given to every Akwa Ibom child.

This can be testified to, by the ongoing monitoring exercise led by the SA to some selected schools in Abak, Ikot Ekpene and Essien Udim Local government Areas in the early hours of Wednesday, 11th March 2020 to inspect activities in the schools.

On arrival at Comprehensive Secondary school, Ikot Oku Mfang , Udofia was received by the vice-principal, who stood in for the principal Mrs Nkoyo Okon Eshiet. while addressing a group of defaulters who came late, and those who arrived after a tip-off by some staff, Udofia, said government will take drastic measures in enforcing compliance and bringing back teachers to the classroom at all costs.

The governor’s aide expressed dissatisfaction while most people find pleasure in collecting salaries for services not rendered, he maintained that many will be sanctioned if they refused to follow laid down rules and regulations .

At Secondary Commercial School, Ikot Etukudo, Ibong, Ikot Ekpene, Udofia expressed confidence in what he saw on the ground, describing it as unprecedented, and commended the Home Economic and Agriculture teachers on their commitment in ensuring the students get a practical knowledge of what they are thought in the classrooms. Noting that it is a rare experience since he embarked on the monitoring exercise. He prayed God to reward teachers who are committed to their duties to replicate government efforts, adding that teachers are the societal builders and if they failed in their constitutional duties, the efforts of government will be defeated and the profession will lose its value, among other schools visited were Nigerian Christian Secondary School Ukpom Abak, Comprehensive secondary school Ikot Oku Mfang, Comprehensive secondary school, Midim, Abak, St Micheal Catholic school, Midim, St Andrew Catholic Oku, Eriam Afaha obong and Independence Independence school, Ukana, Essien Udim. In all the schools visited the SA emphasized on dress code, teaching formula and disciplines as these will give the students the basics foundation to shun criminal tendencies.

In his bid to ensure compliance the SA conducted head count in some schools to help him monitor defiant teachers who are used to leaving the school before closing hours.

Previous: Coronavirus Officially Declared A Pandemic By The World Health Organisation
Next: Education and the way forward in Akwa Ibom State