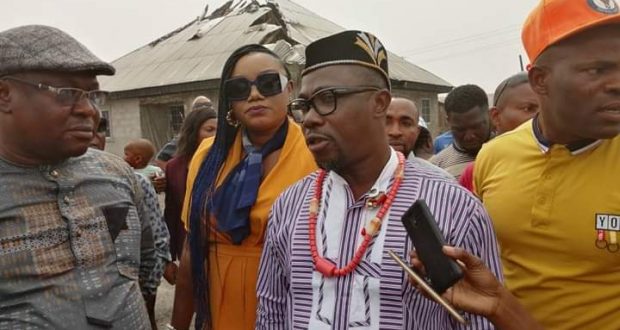 Member representing Esit Eket/Ibeno in the Akwa Ibom State House of Assembly, Dr Usoro Akpanusoh, on Monday, paid a sympathy visit to Iwuokpom community in Ibeno local government area over the recent fire disaster that destroyed houses and property of residents in the area. was received in Iwuokpom at about 2.30 pm by the Vice Chairman of Ibeno local government area, Mr Sunday Isokobo, and other top officials of the Ibeno council area.

The lawmaker extended his deepest sympathies to the victims of the devastating fire incident that destroyed over 500 houses, according to Isokobo, with more than 1,000 persons rendered homeless.

Akpanusoh said his family stood in solidarity with the victims in this difficult time, even as they faced the devastation with courage and fortitude.

The lawmaker, who was visibly touched by the level of damage caused by the inferno, said he was in Iwuokpom to see things for himself and assess the devastation suffered by those affected in the area, following Governor Udom Emmanuel’s visit at the weekend.

“I am here to personally sympathise with residents of Iwuokpom and the entire people of Ibeno local government area in the aftermath of the unfortunate fire incident of last week,” said Akpanusoh.

He handed over some relief materials to the authorities there, saying that the gesture was to alleviate the plight of victims of the fire disaster that ravaged the community.

In his response, the Vice Chairman of Ibeno local government area, Mr Sunday Isokobo, thanked lawmaker for the relief materials and appealed to the government and well meaning individuals to support the victims.

The wife of the Village Head of Iwuokpom and other community leaders who received the relief items on behalf of the victims of the fire disaster expressed gratitude to the lawmaker over the gesture, and assured that the materials would get to the target beneficiaries accordingly.

The items donated include 100 bags of 10Kg rice, 50 cartoons of noodles, 10 cartons of Pepsi cola/Lacasera soft drinks, 100 pieces of wrappers, ten packets of tissue paper, and five cartons of tablet soap, among others.

Akpanusoh also paid a similar visit to the Paramount Ruler of Ibeno, Owong Bassey Achianga; and the Chairman of Ibeno local government area, Hon Ifum Henry Udoh where he sympathised with those affected by the fire incident in Iwuokpom

Although no life was lost in the incident, the cause of the fire is still under investigation.

One of the victims, Happiness Edet Okon, who spoke to this reporter at the scene of the disaster, on Monday, said that the fire started at midnight on Friday.

Happiness said she was still in disbelief that she lost everything, including her house, clothes and shop.

According to her, many of the victims now sleep on the ground by their burnt houses at night as they have nowhere else to go for shelter.

Governor Udom Emmanuel had earlier described the Iwuokpom fire as pathetic and unfortunate.

He made the remark at the weekend when he visited the scene of the inferno to commiserate with the victims of the tragedy.

Represented by the Secretary to the State Government (SSG), Dr. Emmanuel Ekuwem, the governor promised to salvagg the community from its present predicament, while sympathising with families of the victims