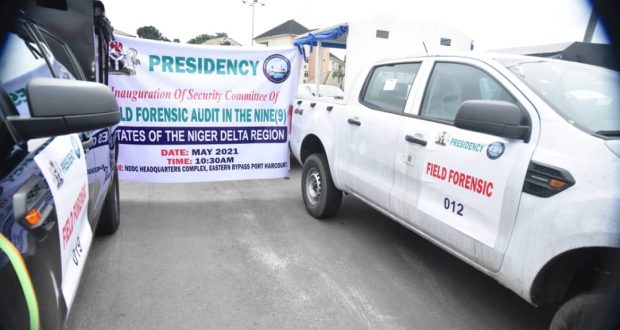 Senator Akpabio, who inaugurated the vehicles at the new NDDC headquarters in Marine Base, Port Harcourt, said that they were meant to assist the security personnel working with the 16 field auditors charged with identifying and verifying the projects across the Niger Delta region.

The Minister, who was represented by the Permanent Secretary of the Minister of Niger Delta Affairs, Dr Babayo Ardo, said that the vehicles would help in the physical verification phase of the forensic exercise.

Dr Ardo, apart from representing the Minister, is also the Chairman of the Security Committee of the Forensic Audit.

The Minister thanked President Muhammadu Buhari for his commitment to the development of the Niger Delta region, as well as the NDDC, noting: “He approved the forensic audit to be carried out to look at their locations, status of completion and level of utilization.

Akpabio observed that the report of the forensic audit would guide further interventionist actions in the region. According to him: “Our initial proposal to Mr. President was to hire vehicles for the forensic exercise. But in his magnanimity, he approved the procurement of new vehicles to be deployed for the exercise.”

He said that the Ministry of Niger Delta Affairs was committed to the rapid development of the Niger Delta region and the repositioning of the NDDC to effectively deliver on its mandate.

Akpabio stated: “The NDDC has had a lot of challenges, but these challenges would certainly be surmounted. We shall leave no stone unturned to see that all obstacles were cleared to enable the NDDC work effectively and efficiently.”

In his own remarks, the NDDC Interim Administrator, Mr. Efiong Akwa, re-emphasised the importance of forensic audit which covers the nine states of the Niger Delta region.

He thanked President Muhammadu Buhari for approving the procurement of 33 Ford Ranger vehicles for the forensic audit to be used by the security operatives working with field forensic auditors.

Akwa said that it was a promise made and kept by Mr. President. He also thanked the Minister of Niger Delta Affairs, Senator Akpabio for ensuring that the vehicles were handed over to the security team assisting the forensic auditors.