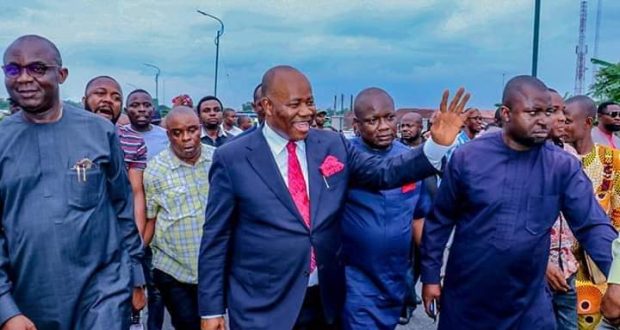 Akpabio and the People

Distinguished Senator Godswill Akpabio made his debut at the Tribunal abjudicating on the matter between Akpabio and Ekpenyong which is before her for determination of who was validly elected to represent Akwa Ibom North West Senatorial District.

Senator Akpabio is challenging the declaration, announcement and issuance of Certificate of Return to Dr Christopher Ekpenyong, former deputy governor who contested for the seat against the former governor as incumbent senator. It goes without saying that the State Government sponsored Dr Ekpenyong ostensibly to embarrass Senator Akpabio who in his word “moved” to the All Progressive Congress as a statesman to join Mr President to right the many wrongs that have for long assailed the Nigerian Nation State.

That change of party by Akpabio among other things irked the PDP and the Udom administration beyond comportment and led to a heavily funded gang-up by the Akwa Ibom State Government against Senator Akpabio’s aspiration to return to the Senate. .

The result was the scripted and orchestrated loss of the senatorial election by Senator Akpabio to the less fancied and unpopular Dr Christopher Ekpenyong whose entry into the race ab initio is said to have been the need for redeeming economic pastures. Akpabio’s attendance of the court session yesterday was without prejudice a symptomatic hint of the outcome of that election and an attestation of the former governor’s undying popularity more the 5 years after leaving the Hilltop Mansion as governor of Akwa Ibom State. The mammoth crowd that turned out is, indeed, a referendum signposting what happened during that election. This assertion arises from the fact that Dr Ekpenyong is a regular attendee of that Tribunal and at no point has his presence drawn a crowd of a quarter of what was witnessed yesterday. Yet he was a deputy governor for 6 years and erroneously touted to be of more political consequence than Akpabio.

The entire Judiciary on Wellington Bassey and adjoining precincts including Government House is said to have shut down with enthusiastic admirers of the former governor leaving their offices and thronging the premises of the venue of the Tribunal on Metro Road to catch a glimpse of the enigmatic character who during his era changed both the psyche of the people and landscape of Akwa Ibom.

Senator Akpabio dressed in suit and tie and looking radiant beamed with smiles as he waved intermittently at the jubilant crowd that addressed him with superlative sobriquets. There was an obvious spirit of communionship as many stretched to touch him with Akpabio also circumventing the security dragnet to pump hands and shake some of them.

But the high points were during the break sessions when Akpabio stepped out of the court room to the open. Each of such moments which happened twice witnessed the crowd erupting with joy on sighting him. While some broke into songs, others rented the air with glowing names for the Senator. There was a mood of nostalgia as many enmeshed emotions recalled his era as governor of the State.

But the highest point of the day was reserved for the end of the session which was rounded off at about 4pm. As the Judge of the Tribunal was about to end the day’s proceedings, he was minded to say that he hopes that as the Tribunal ends the day’s session, there would be no commotion, likely referring to the joyful eruption that follows every time Akpabio is sighted by the crowd. But Akpabio had waited for the Judicial officers to vacate the hall before stepping out to the warm embrace of a crowd that had increased both in size and zeal. The enthusiastic crowd insisted that he must walk with them and as a man of the people, he yielded to the request . A brass band was on hand to add colour to the mood with the crowd breaking into more excitement and dance of joy. Akpabio walked and danced with them from Metro Road into Wellington Bassey Way to Globe Roundabout before finally boarding his vehicle. The entire of the road was locked down in solidarity for a man who has enjoyed the people’s love more than any other leader, living or dead.

Previous: IBOM AIR: Now That We Are Here!
Next: Behold The Comprehensive List Of Senators In The Ninth National Assembly To Be Presided Over By Senator Lawan