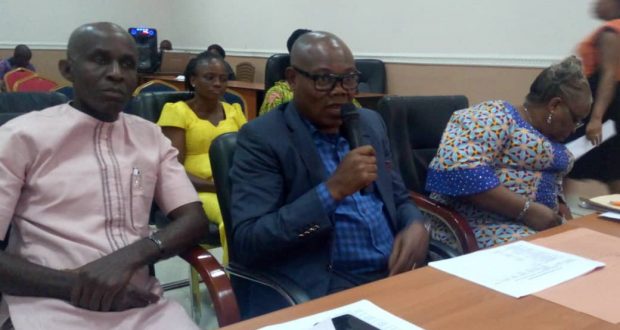 AKHA vows to Cooperate with the Executive

“The Ibom Deep Seaport will soon be a reality” – Akan Okon.

The Akwa Ibom State House of Assembly has assured the Ministry of Economic Development and Ibom Deep Seaport of a cordial partnership in fostering the actualisation of all the lofty goals of Governor Udom Emmanuel’s Completion Agenda.

The House of Assembly also charged the Ministry to be more proactive in making concerted efforts to actualise the vision of His Excellency.

The charge was handed down by the Chairman, Committee on Finance and Appropriation, Rt. Hon. Uduak Odudoh when the committee had a meeting with the Honourable Commissioner, Ministry of Economic Development and Ibom Deep Seaport at the House of Assembly Conference Room today.

Rt. Hon. Uduak Odudoh who also doubles as the Honourable Member representing Ikot Abasi/Eastern Obolo State Constituency, reeled out his committee’s plan of inviting all the MDAs for a 2nd quarter Budget Appraisal so as to take an informed decision on the extent of implementation in a fortnight.

In his remarks, The Commissioner of Economic Development and Ibom Deep Seaport, Mr. Akan Okon thanked the Committee for the assurances of a cordial working relationship.

Mr. Akan Okon informed the House Committee of his Ministry’s approch to making a Citizenship Budget which will ensure accountability and transparency.

“This kind of Budget will be people oriented. It will be based on the needs of the people, so the people must be carried along so as feel their pusle. By doing this, all the projects that will be embarked by the government, will not meet a stiff resistance from the youths of the host communities”, he explained.

The Deputy Chairman of the Committee, Rt. Hon. Effiong Bassey promised the that the committee will draw the attention of the Executive for proper funding of the ministry to enable the proper running of the ministry.

Also a member of the Committee, Barr. Victor Ekwere reiterate the committee’s cooperation with the Ministry and urged the Ministry to be proactive in translating the vision of Governor Udom Emmanuel.

In the same vein, Hon. Mfon Idung (Member Ika/Etim Ekpo) and Hon. Godwin Ekpo (Member Ibiono Ibom), both members of the committee, corroborated with the assurances of the Chairman of the Committee in cooperating with the ministry.

Commissioner Akan Okon assured that the Ibom Deep Seaport project which is one of the lofty projects of His Excellency, Mr. Udom Emmanuel will soon turn out to be a reality by the Grace of God.

In the delegation of the Commissioner on the visit were, Mr. Effiong Ekpenyong – permanent secretary; Mrs. Enobong Okponpong – Director of Planning; Mrs Eme George – Account and other personnel of the Ministry.