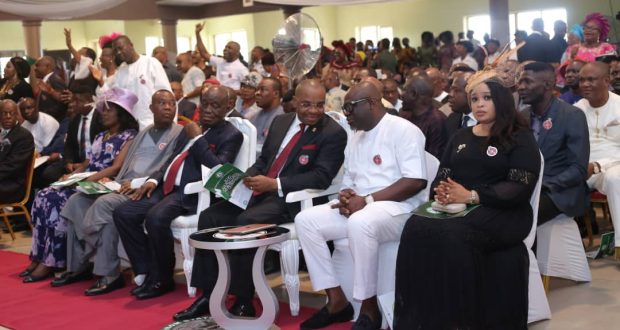 The Speaker of Akwa Ibom State House of Assembly, Rt. Hon. Aniekan Bassey, has called for improved welfare, for families of military men who lost their lives in active service.

The Lawmaker flanked by his Wife, Mrs Itohowo Bassey, lauded efforts of the Armed Forces in defending Nigeria’s territorial integrity and also called for more prayers and support for families of those who died in active service to the nation.

Rt. Hon. Bassey further urged the Federal Government and military authorities to prioritise the welfare of serving and retired military personnel, as a way of appreciating their immense sacrifices for the sustenance of peace and security in the country.

Earlier during the Service, the State Governor, Mr Udom Emmanuel, paid glowing tributes to the fallen heroes who laid down their lives for national peace and unity.

While reiterating his administration’s commitment to peace and security in the state, the Governor promised to collaborate with the Ministry of Agriculture and Women Affairs, to draw up programmes that will enhance the welfare of widows of the slain soldiers.

In his homily tagged “The Reality of Spiritual Warfare”, Senior Pastor of Word Tabernacle, Bishop (Dr.) Gabriel Nkanang, harped on the need for Christians to love and tolerate one another, adding such virtues are needed for growth and development in the state and nation.

The event featured prayers for Akwa Ibom State, Nigeria, the Governor, Arms of Government, the Armed Forces, Nigerian Legion and Families of the fallen heroes.

Meanwhile, the Speaker will on Wednesday, January 15, 2020, join
other top government functionaries at the Cenotaph, Uyo, to lay wreaths in honour of those who died in active service in Nigeria.