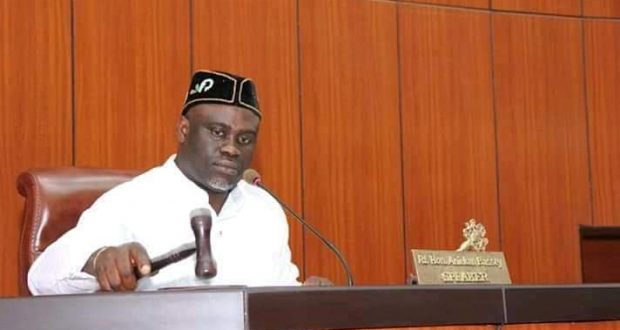 The Akwa Ibom State House of Assembly has initiated moves to ensure stiffer punishment for persons convicted of rape and other violent crimes in the State.

The House at its plenary on Thursday, described as worrisome, the rising cases of rape and other violent crimes in Akwa Ibom State and noted that the need for capital punishment against offenders was important.

The position came, following a Bill
for a Law to Eliminate Violence in Private and Public Life, Prohibit all forms of Violence Against Persons and to Provide Maximum Protection and Effective Remedies for Victims and Punishment of Offenders and for Related Matters, sponsored by the Deputy Leader of the House, Rt. Hon. Aniefiok Dennis and fifteen others.

Rt Hon. Dennis, in the lead debate,
condemned recent violent crimes in the State and said the Bill when passed into law, will protect women, children and other persons against abandonment, circumcision, domestic and economic abuses.

He said it will also curb forced financial dependence, sexual exploitation, emotional, verbal and psychological abuse and said there must be penalties to discourage offenders from these acts.

The Member representing Ibesikpo Asutan State Constituency, Rt. Hon. Aniekan Uko who is a co-sponsor of the Bill, said violent crimes were not only particular to women, maintaining the Bill when passed into law, will also protect the men from all forms of harassment.

Another co-sponsor of the Bill and Member representing Onna State Constituency, Rt. Hon. Nse Essien, said the Bill seeks to criminalise harmful traditional practices and urged his colleagues to support the bill to see the light of the day.

In his remarks, the Speaker, Rt. Hon. Aniekan Bassey who lauded Members for their interests in the Bill, referred it to the House Committee on Woman Affairs, Social Welfare and Cooperative and directed the Committee to report back to the House within one month.

Earlier, the House also directed the state Ministry of Works to intervene on the failed portion of the Enen Atai Itam axis of Calabar-Itu Highway, following a Motion of urgent public importance brought before the House by the Member representing Itu State Constituency, Hon. Kufre-Abasi Edidem, who informed the House of the deplorable state of the road.

Also, the House received the Draft Legislative Agenda for the 7th Assembly, while the Speaker, Rt. Hon. Aniekan Bassey referred it to the House Committee on Rules, Business, Ethics and Privileges for further legislative action.

Meanwhile, the House has adjourned its plenary to Tuesday, 23rd July, 2019.