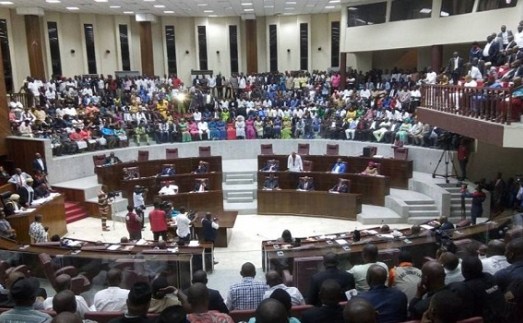 AKHA: Expectations Before The 7th Assembly

Today, few hours from now, a new chapter is opening in the annals of Akwa Ibom State Parliament as Governor Udom Emmanuel proclaims the commencement of Legislative business of 7th Assembly of the State.

However, out of the 25 members of the incoming 7th Assembly, 15 Legislators are returning members while 10 of them are first timers.

Still on the composition of the House, with only two women representatives (Okobo and Ukanafun) in the 7th Assembly, much agitated 35% affirmation action compliance is strongly below average as women representation has not increased from that of 6th Assembly.

However, it is acknowledged that with the mix of new members which expectedly will inject fresh breath/perspective(s) to the State’s legislative business, it is also anticipated that deliberations, debates, votes etc. in the House will benefit from the experience of returning members and the recent training/re-training they have received and will further obtain shall translate to better service delivery to expectations of electorates.

As incoming members of the 7th Assembly gear towards giving a robust representation to their respective State Constituencies, it is necessary to have and understanding the core mandates of a legislator; Legislating, representation and oversight functions. Also, 7th Assemblymen, especially new members should pertinently become conversant with tenure of seat of members, the concept of separation of powers and independence, the intertwined relationship between Legislators and the media, and expectations of the electorates/rights of measuring the performance of the legislator.

LEGISLATIVE WORK:
Simply put, the cardinal role of the legislator is to make laws. Although aside from making laws, legislators often engage in other activities than this. Serving as bridge between government and the masses, they are in no small measure vested with the responsibility of enabling societal development and prosperity by the quality of laws they make.

Putting it lucid to Constituents, it is not the role of legislators to build roads and provision of other social amenities but the quality of laws they make can as well facilitate quick and efficient delivery of these service for the common good of citizenry.

The Sixth Assembly has left behind indelible mark through presentation of “53 bills, over 40 motions which produced more than 100 resolutions, chief among them being the resolution naming the State airport after His Excellency, Arc. Obong Victor Attah. Out of the 53 bill, 32 have been passed into law while others are at advanced legislative stages”.

At the closing chapter of the 6th Assembly, 3 bills have been passed into law. The bills are:

“Bill for a law to Provide for the Regulation of Waterfront Infrastructure Development in Akwa Ibom State and for other Matters Connected therewith”.

These bills when assented to and subsequently implemented shall expand the scope of the State capital, improve internally generated revenue of the State and bring profund life changing benefits to the masses.

These are no mean feats that the 7th Assembly must match if not exceed, and certianly, with the quality of returning and new members, the incoming Assembly shall leave above board.

REPRESENTATION/RESPONSIBILITIES IN THE CONSTITUENCY:
Staying in touch with constituents is an overwhelming task but very critical. As defined within the Nigerian community, due to members knowledge of services offered by various levels of Government, they are expected to assist and help constituents resolve some of their pressing needs and problems.

Frequently interface with constituents is needed as an avenue for feeling their pulse and this could only be achieved through a sustainable interpersonal skill for appropriate understanding for proper defence of the constituents’ interest and right when need arises at the plenary.

Accessibility, picking and returning of calls, replying of mails (mostly difficult in the present day) and holding of town hall meetings/constituency briefing/empowerment programmes shall be of added advantage and these make the job easier. Advisedly, follow the trend, start a blog or post your views on an official Facebook page.

OVERSIGHT FUNCTIONS:
Base on designated committees to members by the incoming Speaker, legislators will have major role of oversight over executive. They will be expected to oversee and monitor all the programmes, policies and schemes that the executive implements.

The Executive on the other hand is not to misconstrue oversight as witch-hunting or fault-finding mission but an approach towards achieving transparency, commitment and efficient delivery of Government programmes by Ministries, Departments and Agencies for the common of rhe State.

CONCEPT OF SEPARATION OF POWER AND INDEPENDENCE:
Although, it will be a great disservice to electorates if the 7th Assembly become the lap dog of other arms of Government, it is also a necessity for the State Legislature to establish, maintain and sustain a cordial working relationship with the executive and Judiciary, accordingly.

TENURE OF A SITTING MEMBER:
In line with section 105 of the Constitution of the Federal Republic of Nigeria, the life span of an Assembly is four years commencing from the date of the first plenary of the House. Similarly, Section 109 (1) elucidates the conditions that could lead to the vacating the seat of a member in the House.

INTERTWINE RELATIONSHIP BETWEEN LEGISLATORS AND THE MEDIA:
“Were it left to me to decide whether we should have a government without newspapers, or newspapers without a government, I should not hesitate a moment to prefer the latter”. Thomas Jefferson

The above postulation by Thomas Jefferson explains the indispensable nature of the press in any given democratic Society. For a lawmaker to record giant strides and keep constituents abreast with his activities as well as interpresting government policies and programmes to them, he must ‘Work With The Media’.

It would be grossly erroneous to assume that the media is a politician’s or lawmakers’ adversary.
Reporters, writers and Assembly Press Corps have a responsibility to inform the public and they take it seriously.

It is important to contact the press regularly to inform them about position on issues and the programme, work and even services you are doing. It is equally important to know your local newspapers’ deadlines. Develop the culture of promptly calling reporters, do not expect them to use your press releases if you avoid their phone call, above all, be accessible at all times.

EXPECTATIONS OF ELECTORATES:
Most importantly, what is expected from 7th Assembly legislators is to make laws that will propel the growth, advancement and development of Akwa Ibom State. Beyond this, they are also expected to open and run functional constituency office. Perhaps, the House may agree on a day commonly to all where everyone goes to their constituency offices for a first-hand interface with Constituents, this will great a stronger bond between the legislator and the electorates.

Also, citizens for their best interest, must not relax but demand both accountability and performance from their Assemblymen for the next four years.

Today, the long awaited new dawn is breaking forth, members of 7th Assembly are few steps away from charting a course that will usher in indelible legacies at the end of their four years tenure in office (all things being equal), it is therefore incumbent on them to strive executing their mapped-out electioneering campaign promises and commitments.

It will be timely for the incoming assemblymen for 7th Assembly to become more thoughtful now about how they can seed trust and create appropriate template for meeting the expectations of the electorates as promised.

Worthy of note is that legislative business isn’t a rollercoaster ride. Times will get tough, and roadblocks will come up. It is up to our legislators to push through with zeal, re-evaluate, and within reason, live up to the expectations of those who elected them. In other words, tenacity is something for which they should all strive at all times for a robust, engaging and people-Oriented Assembly.