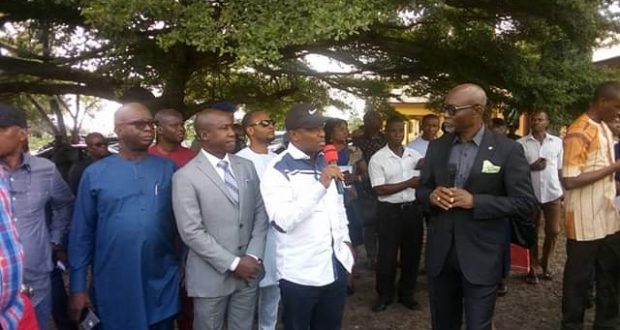 The Akwa Ibom State House of Assembly Committee on Local Government and Chieftaincy Affairs that was inaugurated just last week has swung into action with its oversight function.
The committee chaired by the member representing Nsit Atai State Constituency, Mr. MARK ESSET and other members undertook an inspection tour to seven local government areas yesterday.
The local government visited were Ibiono Ibom, Ikot Ekpene, Abak, Ibesikpo Asutan, Nsit Ubium, Eket and Nsit Atai where the council chairmen were not in their offices except for Ibesikpo Asutan. The lawmakers, who expressed displeasure over the attitude of local government workers to duty, also observed with disappointment, the state of sanitation in the work environment of most areas visited.
The chairman of the committee, Mr. MARK ESSET in his remarks said the committee undertook the oversight function to enable it ascertain the level of projects initiated by the third tier of government.
At Nsit Atai local government area, a member of the committee who is also the member representing Ibiono Ibom state constituency, Mr. GODWIN EKPO frowned at the state of affairs in the council which the offices are under renovation and urged the Head of Service, ALICE AKPAN to ensure that the renovation work has a terminal date.
Our correspondent reports that the heads of service in all the council areas visited complained of insufficient funds to carry out new projects and complete existing ones.
2019-07-04
dozzier