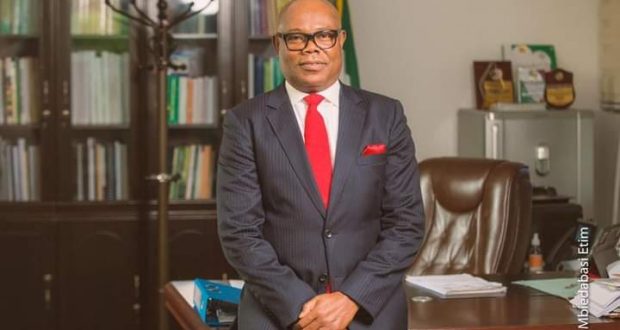 Born on Nigeria’s Independence day in 1965, this gentleman belongs to a rare class of people who have sweetly blended individual success with public service.

With a strong penchant for excelling in anything he does, Mr Akan Okon , the Honourable Commissioner for Economic Development and Ibom Deep Seaport, Akwa Ibom State is always poised, willing, ready and able to weave solutions out of every knotty circumstance. He is always ready to serve and to touch the lives of people in many exceedingly remarkable ways.

At first contact, you’d be tempted to take his target-oriented, no-nonsense posturing as a hard-nut to crack. But beneath that facade lies a natural pleasantness, a friendly spirit and a charming brilliance.

Mr Akan Okon is a man of many worlds, from the intellectually competitive and demanding atmosphere of financial services to the crazy realms of politics and management in government, there hasn’t been any point of deviation from the normal for this intellectual giant in terms of inputs and outputs – the measure has been essentially the same. For Mr Akan Okon, service is service and life should be better for everyone.

From the moment he took over as Commissioner for Finance in May 2014, I have been impressed with his work ethics. He excellently oversaw the day to day running of Ministry of Finance, the Office of the State Accountant-General, the State Internal Revenue Service and the State Budget Office. He scrupulously saw through the Financial Management and fiscal policy of the State while overseeing the day to day cash management systems of the State government. He developed models and strategies to ensure an effective and efficient delivery of key Government programmes and strategies. As at excellent man manager, Mr Akan Okon had effectively harnessed the human resource capacity of over 1,500 staff for service delivery.

At the Ministry of Housing and Special Duties, and later Aviation development, he has brought his midas touch to interprete the visions of Governor Udom Emmanuel. The Uyo airport became beehive of activities even as the place wore a new look. The construction of the 2nd runway was under his strict supervision. The big one, Ibom Air enjoyed his midas touch and supervision. The Ibom Seaport project many may not know is advancing greatly and Mr Okon has his hands on them. The projects are numerous but there will be time to discuss all that. Not today.

I can testify that Mr Akan Okon is ensuring a robust implementation and delivery of the state’s turnkey projects through efficient management and innovative strategies for socio-economic benefit and transformation of the state.

Mr Akan Okon’s background offers an insight into his great personality. As MD/CEO of Fantixis Investments Limited from January, 2010 to October, 2013, he simply wrought wonders in the business world. Meanwhile, Fantixis Investments Limited is a Financial Advisory firm providing fresh impetus to the economy through the launch of an aggressive Enterprise Support Services spanning Corporate, Business, Project, Financial advisory and ICT/Telecoms consulting.

At First Inland Bank Plc. from January, 2009 to December 2009, Mr Akan Okon served as Area Executive, South South and bore the responsibility for supervising all the Branches of the Bank in Akwa Ibom State Cross River State, River State and Delta State. He was also responsible for business Development and the profitability of over 50(fifty) branches in the South-South region and a little down memory lane, his achievements are enormous.

He served as Head, Investment Banking at First Atlantic Bank Plc from October, 2002 to December 2006. At Standard Trust Bank Limited, he served as Area Manager, Calabar and Uyo, between January to September, 2002. He was Group Head- Uyo of the same Standard Trust Bank from July, 2001 to January, 2002 and Group Head, Electronic and Retail Banking (North Central Region) from September, 2000-July, 2001.

A Paul Harris Fellow of Rotary International and married with a lovely wife and amazing children, Mr Akan Okon is sympathetic, empathetic, steady, kind, assertive, proficient, efficient, competent, aggressive, experienced, intelligent, mature, humble, attentive, generous, God fearing, broken, educated, honest, trust worthy, loyal and modernized. He is well celebrated by his people and the many lives he has touched. The people of Itu regard him as a special Godsent and when he speaks, they hear honesty, sincerity and love. Indeed, Mr Akan Okon is one of our sons in whom we are well pleased.