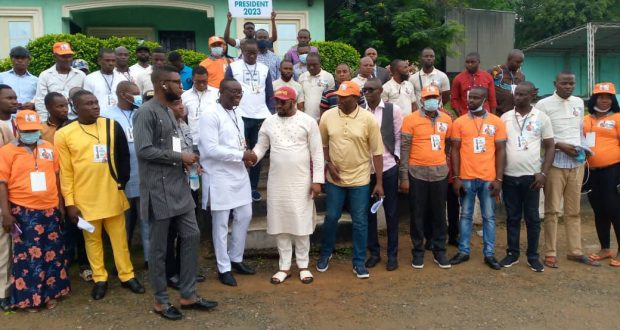 Youths in Akwa Ibom State have vowed to support the aspiration of the governor of Kogi State, Alhaji Yahaya Bello into ASO Rock in 2023, and warned other prospective contestants from the Six Geo-Political Zones to drop their aspiration because the Kogi State Governor, Alhaji Yahaya Bello is the best choice in 2023 to take over from president Mohammadu Buhari in the next couple of months.

Addressing the over 7000 supporters on Monday, August 9 at Tilapia Resort in Abak Local Government Area of the state, the Deputy Speaker of Kogi State House of Assembly (KSHA), Rt. (Hon /Ahmad said the state governor is a replica of the descriptions and thanked the youths for their foresight towards the betterment of Nigeria.
The Deputy Speaker who represented governor Yahaya Bello described his principal an a detrabalized Nigerian devoid of religious sentiment and voiced that Akwa Ibom youths and their counterpart in the South-South region will never regret their stand after 2023 when Alhaji Bello will succeed the incumbent president.

Meanwhile, the Akwa Ibom State coordinator, Mr. Henshaw Ekarika said that he is happy to identify with Yahaya Bello because as a youth he will through determination carry the youths, the less privileged and the needy along.

The State Coordinator of “GYB2PYB” promised to propagate his principal across the state and assured the governor’s representative, the national body that “GYB2PYB” is a house hold name in the state, and thanked member of the group who trooped en-mass to witness one of the best performing governor in Nigerian who will take the country from the nadir of shame to the zenith of glory by erasing the shameful chapter of the giant of Africa in 2023.