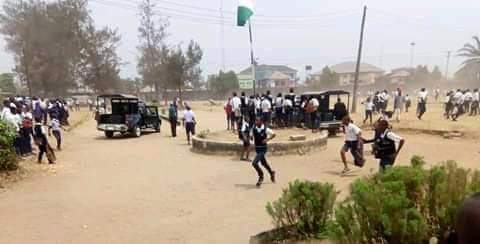 A’Ibom State Government Shuts Down Technical College In Uyo Because Of Students Riot .

The State Commissioner for Education, Professor Nse Essien who announced the decision in a press release, noted that the students are advised to vacate the school premises with immediate effect while the staff of Ewet Technical College, Uyo is, however, to continue to report to duty.

pledges support to Nigeria Police to combat insecurity in the country.
Meanwhile, the commissioner while frowning at the situation, said the order to shut down the school by the ministry of education was to enable thorough investigation to establish the remote and immediate cause of the unrest

The commissioner further called on parents to ensure they give proper orientation to their wards before sending them to school to prevent such unruly behavior among students.

Some students of the Technical College on Wednesday reportedly went on rampage, destroying properties and inflicting injuries on staff and members of the public while other students who were supposed to be in their classes studying, were seen jumping the fence of the school to escape from danger caused by a few bad elements among the students population.