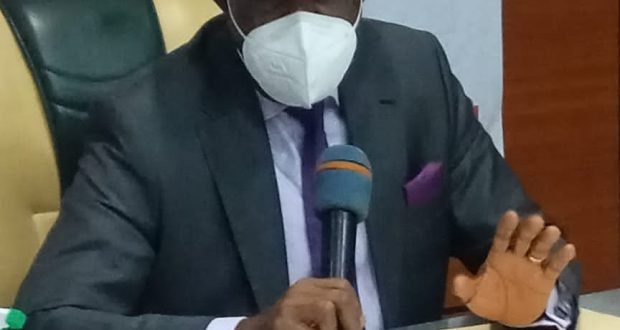 The Secretary to Akwa Ibom State Government,Dr Emmanuel Ekuwem,has pledged his support for Engr. (Mrs) Mayen Adetiba, a daughter of the state for the position of the Deputy President, Nigerian Society of Engineers (NSE).

The SSG’s nod of support was disclosed during a courtesy call on him by the South South Professionals Forum (SSPF) of the Nigerian Society of Engineers (NSE),in his Office on Tuesday.

Dr Ekuwem, himself a Fellow, Nigerian Society of Engineers,FNSE,who pledged his support for Mrs Adetiba for the position,remarked that having been in engineering profession for many years contributing “very selflessly” to the growth of NSE and engineering as a whole,Adetiba was eminently qualified for the position of the Deputy President of the body.

While urging the aspirant whom he described as a graceful woman to reach out to other members of NSE across the country,Dr Ekuwem charged Engr. (Mrs) Adetiba not to be intimidated by anyone over her ambition.

The SSG expressed the hope that with her proven track records,he has no doubt that when she eventually emerge as the Deputy President of the Nigerian Society of Engineers that she will take the body to greater and enviable heights.

According to him,Mrs Adetiba should not be denied the position on grounds that she is a woman as quality knows no gender.

Chairman, South South Professionals Forum (SSPF), Engr.I.Z.Akobo said that the decision of Dr Emmanuel Ekuwem, whom he described as a “very senior member of NSE with high standing” to galvanise Engineers across the Nation was vital to giving Adetiba victory during the 2021 Annual General Meeting and National Conference of NSE holding in Enugu in November, when the election will be conducted.

Akobo thanked the SSG for granting them audience and also commended him for his immense contributions to the growth of engineering profession in particular and the society in general.

He said SSPF, the umbrella body for all engineers in the South South geo-political zone of the country was in the SSG’S office to brief and interact with him on the importance of the forum and also solicited his support towards the actualisation of the ambition of one of their own, Mrs Adetiba.

According to him,if Mrs Adetiba emerges as the Deputy President of NSE, she will automatically become the President of the body at the expiration of the tenure of the incumbent President,in line with the laid down rules and practice of the body.

According to him,SSPF was working assiduously to seek support from members of NSE in other regions to secure victory for Mrs Adetiba.

Akobo also stated that the body was formed to reach out to Engineers in the employ of governments within the geo-political zone, with a view to proferring solutions to critical engineering issues that may arise in government approved and executed projects.

Also speaking, the Uyo branch Chairman of NSE,Engr.Ukeme Okpob said Adetiba having been vice presidents of the body for three times, that she is eminently qualified for the position of the Deputy President and therefore expressed the readiness of all Engineers in the state and the region to throw their weight behind Adetiba’s aspiration.

In her note of appreciation,Engr. (Mrs) Mayen Adetiba, said she was honoured and humbled by the declaration of Dr Ekuwem to support her aspiration and therefore assured the SSG that if she wins, she would make Akwa Ibom State,South South geo-political zone and the Nigerian Society of Engineers proud.