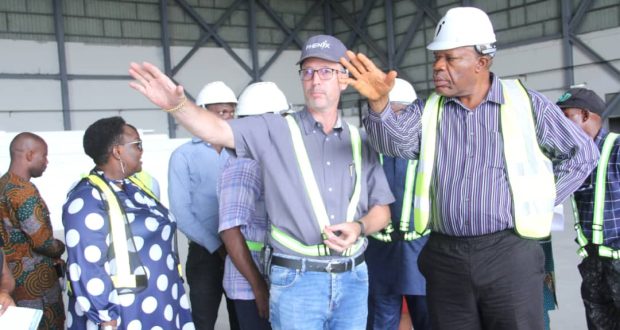 In a chat with newsmen during the inspection, the commissioner said his visit was to enable him get familiar with various ongoing projects at the airport and know contractors handling the projects to ensure strict adherence to specifications and delivery.

“As a newly sworn-in Commissioner, it is my responsibility to be abreast with the level of progress in all the project sites within my jurisdiction. That is why I am here.

“The essence of the inspection is to assertain the overall level of progress and this has to be in line with the completion agenda of His Excellency, Governor Udom Emmanuel.

“Timeline has to be drawn in each of these projects and we have to follow the contractors to ensure that they comply with this timeline”, he said.

Speaking at the Terminal building project site, Engr. Onur Uzel who is the project manager, said that the current work at the terminal building was at about 90 percent completion level.

At the access road of the terminal building, the project supervisor, Engr. Inimfon Obot of the VKS Construction Company said work on the Four access roads with Roundabout would be completed in one month time.

Another project contractor, HENSEK Integrated Services Limited, represented by the Chief Executive Officer, Engr. Uwem Okoko
informed the Commissioner that the VIP car park is at about 90% completion and that the work will be completed in two weeks time.

At the end of the inspection, the commissioner expressed satisfaction with the level of work done and charged all the contractors handling various projects to redouble their efforts to ensure they complete their work on time.

The Commissioner was accompanied to the inspection by the Permanent Secretary, Ministry of Special Duties, Engr. Udosen Ephraim and other staff of the ministry.