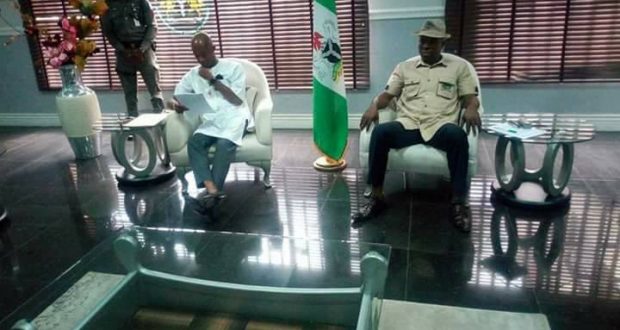 The Speaker of Akwa Ibom State House of Assembly, Rt. Hon. Barr. Onofiok Luke has commended the youth friendly disposition of the Ayuba Wabba led national leadership of the Nigeria Labour Congress, NLC as well as the Akwa Ibom State leadership of the labour body under the watch of Comrade Etim Ukpong for recognizing the place of the youths in the scheme of things in the NLC.
He described the creation of a youth wing in the NLC as a step in the right direction. Barr. Luke gave the commendation on Thursday while receiving in audience the Akwa Ibom State leadership of Youth Wing of the Nigeria Labour Congress at the House of Assembly complex. Luke, a pioneer Speaker of the Nigerian Youth Parliament also congratulated Comrade Victor Ekpo an Akwa Ibom son on his emergence as the National President of Nigeria Labour Congress – Youth Wing.

In his words “Let me use this opportunity to appreciate the national leadership and the State leadership of the NLC for recognizing the place of youths in their scheme of things to the point of creating the youth wing of NLC. Any organisation that wants to grow must consciously give a place for the youth population”.
“That is what the NLC has done, and i congratulate Comrade Victor Ekpo on his emergence as the National President of the Youth Wing of the NLC. I am happy that he has imbibed the DAKKADA spirt which is the faith of greatness. I represent the interest rate of the youths as Speaker of Akwa Ibom State House of Assembly”

In his speech, the President of the NLC, Youth Wing Akwa Ibom State Council, Comrade Joseph John, informed the Speaker that the youth wing of the NLC was founded on the ideological principles of preparing the youths of today for future leadership roles. He hinted that an Akwa Ibom son by name, Comrade Victor Ekpo emerged as the pioneer President of the youth wing of the NLC in Nigeria during the formal inauguration of the body and election at the national level in 2017.

Comrade John hailed Barr. Onofiok Luke for uniting the 6th Assembly and for ensuring speedy passage of previous state budgets and for enacting laws that promotes the wellbeing of Akwa Ibom people.