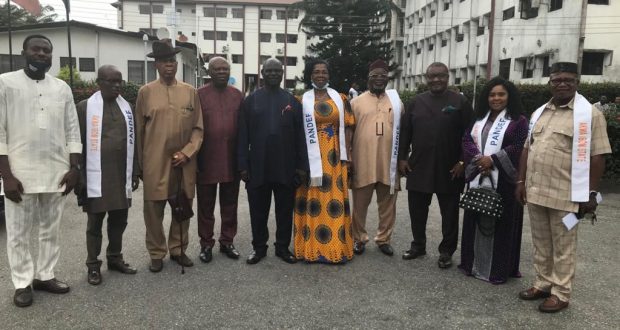 In her speech, The Acting State Chairman, who is the former Secretary to Akwa Ibom State Government noted that the group visited the National Chairman because he is an important voice in the country. She stated that Ibok Essien’s vast knowledge and understanding of the complexities and intricacies of the Country and region would be of immense benefit in the efforts to resolving the challenges confronting the region.

She expressed her gratitude to God for making the visit possible, equally appreciated senator Essien for the audience granted to them, despite his very busy engagements.

She however, congratulated the new Chairman for his emergence, promised to give him the needed and deserved support to succeed. She also used the occasion to informed the National Chairman of the sudden death of the State Chairman, Senator Etang Umoyo, and therefore solicited for the support of the National body to be given a befitting burial. Obongawan Ekong appealed to the National President to integrates the state chapter of PANDEF in the scheme of things.

Also speaking, the State Financial Secretary,Rt.Hon.Dr Etido Ibekwe, restated the group’s willingness to actively involve in most agreement reach my the body in order to protect the interest of Akwa Ibom people.

In his response, The National Chairman of PANDEF, Senator Emmanuel Ibok Essien, deeply appreciated his nomination by the chapter for the office and, disclosed that since assumption of office, he has carry out some activities which includes; having NEC meetings with stakeholders, like the former President Goodlock Jonathan, among others.

Senator Ibok Essien, a former Deputy Chief Whip of the Nigerian Senate who represented Ikot Ekpene Senatorial District said it was another opportunity for him to serve not only the people of Akwa Ibom State but Niger Delta as a whole and thank the leadership of Akwa Ibom PANDEF members for the confidence they have in him

He promised to run an all inclusive administration, where all chapters will contributes to the growth and development of the Forum , as well as taped due benefits accrued to members. Senator Essien, described PANDEF Akwa Ibom State chapter as bunch of intellectuals passionate about developing Akwa Ibom state.

The National Chairman, decried the state of insecurity in the country, leading to deaths of people and destruction of properties worth billion of naira, and call on government as a matter of urgency and importance address the issues, while laying emphasise on Nigeria restructuring as a panacea for peace, stability and justice.

He informed that PANDEF in collaboration with other regional bodies like, Arewa Consultative Forum, Ohanaze Ndigbo, Middle Belt Forum, Afenifere Group are planning to organise a National security summit to address the insecurity in the country, which according to him has affected nearly all sectors of our economy.

The former lawmaker, commiserated with PANDEF over the demise of their State Chairman, Late Senator Etag Umoyo and described him as a strong pillar & advocate for equity and justice. “Senator Etang Edet Umoyo lived well at all times. His imprints will continue to loom large as he was an intellectual, a scholar,  a community builder and patriot, I pledges the support of national body in this regard, as he will be given the final obsequies.”

Other issues discussed during the visit include state of the nation; worsening insecurity, restructuring and the various secession agitations and other critical infrastructure by the Federal Government