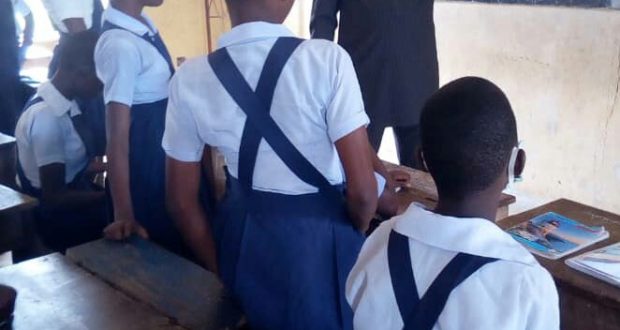 Worried by poor attitude of some teachers to work, the Akwa Ibom state Government has stated its determination and readiness to henceforth disengage any teacher under its employ displaying acts of truancy and academic laxity.

Special Assistant to the governor on Education Monitoring, Akparawa Udeme Udofia stated this during his routine school monitoring in Etinan and Mkpat Enin local government areas. Udeme, who noted that government has discovered that secondary school teachers posted to some schools always abandon their work for farming and trading activities, warned teachers to desist from such act as government will not hesitate to prosecute any teacher found abusing his or her duty post.

The government’s monitoring machinery has double its efforts to ensure government’s efforts are reciprocated and warned that whoever is found wanting will be sanctioned accordingly.

The SA who described his boss, Governor Udom Emmanuel, as education friendly Governor noted that having taken upon himself the task of repositioning the state’s educational standard, the governor is poised to ensure that qualified teachers, adequate basic facilities and other essentials are in place to compliment his efforts.

He called on teachers to maintain impeccable character and be passionately committed to the educational development of every Akwa Ibom child, while urging teachers to instill discipline on their students accordingly.

Udofia described the situation where some teachers do not work but still receive monthly salaries as wickedness, saying such act will hinder government’s efforts in giving Akwa Ibom students the best education as envisaged.

He hinted that it is not going to be business as usual as the ministry has improved on school monitoring to checkmate teachers and students’ excesses for effective service delivery.

Udofia stressed that the ministry would continue to pay unscheduled visits to schools henceforth and teachers found wanting would be shown the way out, hinting that for the 1000 teaching vacancies advertised about 47,000 applications have been received, meaning that the unemployed are more willing to replace whoever will be discipline

The governor’s Aide pleaded with the students, teachers and the general public to adhere to safety guidelines and measures laid down by the Nigeria Centre for Disease Control, NCDC, and other frontline health institutions in order to reduce the spread of Corona Virus, saying adherence to laid down measures was the way to go.
Udofia was accompanied by Barr. Akaniyene Okponganam .
The schools visited were Mbioto Town school, Mbioto11. Government technical college, Mbioto 11 ,Community Technical College, ikot Akata, Mkpat Enin and others.