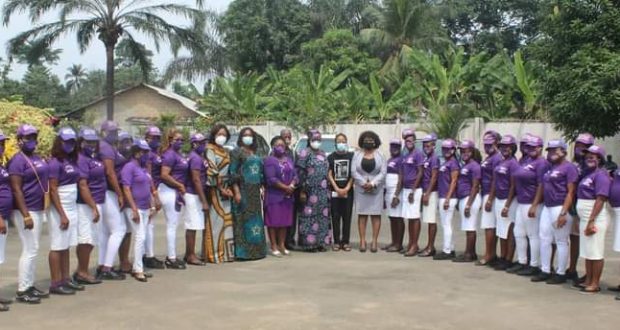 …Describe him as a National figure

The group led by the President General, Lady Edna Edwin and other executive member across the three Senatorial District during a condolence visit to the wife, Her Excellency, Deaconess Funmi Idongesit Nkanga, in Nsit Ibom, expressed sadness over the death of late Nkanga, having considered his contributions to humanity most especially to female youths development.

Lady Edna who is also the Special Assistant to the Governor on projects monitoring disclosed that Nkanga’s wise counsel is what is keeping the group strong and alive over the years.

“Our father was a God fearing man, who lived his entire life serving the youths. We love him, he was our mentor and a national figure, whose Contributions to Nation’s building will not be forgotten in a hurry, we prayed God to forgive the shortcoming of the deceased and grant his soul eternal rest. Give fortitude to everyone he has left behind to bear the irreplaceable loss and fill the vacuum.”

The association as a mark of respect prayed for the family and observed a minute of silence to the late statesman.

Receiving the female youths, Her Excellency, Deaconess Funmi Idongesit Nkanga, wife of the late statesman thanked leadership of the group for the honour done to the family, advising them to always exhibits noble qualities her late husband gave to them while alive, sue for peace, unity and humility which according to her is the principles of a virtuous woman.

“I know for all we do there is reward, for the affection you shown to me, God will reward you and show you mercy. God will honour you as you have honour my late husband. I want you all to Imbibe peace and love, as always exhibited by my late husband,” Mrs Nkanga noted.