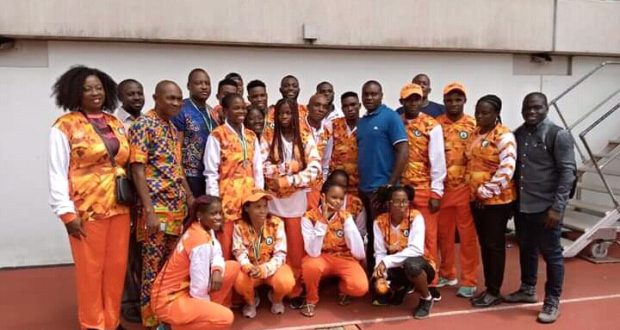 For their outstanding performances in the just concluded National Sports Festival in Edo State, The Akwa Ibom State Athletic Association has rewarded the state athletes, who participated in various sporting activities for making the State proud, which urging them to always put in their best, as the future belong to the youths.

Speaking through the association representatives Engineer Akaneyene Ntuk and Mr Nyakenoabasi Patrick Akpan, the duo appreciated the athletes for exhibiting term spirit throughout the competition.

Addressing athletes at the Godswill Akpabio International stadium (Next of Champion),Mr Nyakenoabasi Patrick, thanked them for their spirit of sportsmanship, said their well behaviors have earned them international recognition having shown at the sports festival.

“Thank you all for making us proud, do not look at your little beginning as an hindrance to what you will achieve in the future, but understand that no one consider your struggle until you make a name, once you make a name you will make all the money for yourself. “

He said the reward will serve as a morale boaster for athletes who want to represent Akwa Ibom State in the next event.

In his words of appreciation to athletes Mr Akaneyene Ntuk thanked the athletes for the team spirit exhibited during the festival applauded them for making Akwa Ibom State proud with gold, silver and bronze medals.

Ntuk encouraged them to keep the flag flying as the future is full of great expectations. He motivated them to keep faith with whatever they are doing.

To those that won bronze medals, he told them to put more efforts in training as the sky will be their starting point. To Silver and bronze medalists, he advised them to keep working for more success.

The association use the occasion to called on the state government and other sports lovers to encourage athletes in all sports rather than focusing on football only.

Reacting on behalf of the athletes, Comfort James, who won silver in 1500m and 800m in women expressed gratitude to the vice chairman and other board members for their kind gesture towards Akwa Ibom athletes.

She thanked the coaches for training them and ensuring they were fit for the Sport Festival in Edo State while promising that as athletes, they will continue to do their best to defend the orange colours of the state.