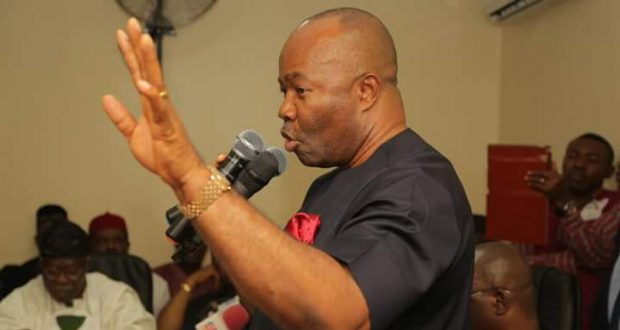 He that is down needs fear no fall
He that is low, no pride
He that is humble ever shall
Have God to be his guide

I am content with what I have
Little be it or much
And, Lord, contentment still I crave
Because thou savest, such.
– John Bunyan (1628 – 88).

About 7 days ago, about 3 hours after I made public my genuine advice to Senator Godswill Akpabio, I received a call from the former Governor, Akpabio, himself. The man was furious, extremely furious with me for writing what he called “insult and destructive article” about him. He vowed to go extra miles to deal with me, especially as he recalled how I used Global Concord in the past against him and his Government. He said he had alerted “security” agencies to track me down… He didn’t give me the chance to talk, only that I was only able to tell him that if he was referring to my last article about him that I’m afraid he didn’t read it before he came to roar and barked at me. His utterances that day advertised him as one of those who only read the cover page of Global Concord Newspaper and run to town with stories that can never be found in any page of the Paper (I may be wrong). Can the dethroned Senator points to any libelous statement in the said piece?

Anyway, I’m not bothered about Akpabio’s threats because they will always come insofar as he has not being able to explain why he could not build 31 industries which were captured in his so-called BUDGET OF INDUSTRIALIZATION in 2012. Senator Akpabio will bark all he wants, and threaten me as usual unless he is able to tell me why IBOM TROPICANA has not seen the light of day after all the money budgeted for it had been removed upfront from the State’s coffers, and supplementary sum appropriated for it. Of course, many other issues in the State are calling for Akpabio’s series of threats. WHO CARES?

Between 2008 and 2015 I was not only threatened by Akpabio but I saw it all. I was hunted by his “security agents”. I was severally chased out of my numerous apartments and I finally found refuge at Calabar. So, what’s new about Akpabio’s threats? If he could threaten me as a Governor without success, will he succeed to do that now that GLORY HAS DEPARTED FROM HIM? He told me last Friday that he was going to face me ” man and man, one on one”. I’m here, Sir.

Since the threat didn’t suffice, Senator Akpabio immediately resorts to blackmails. What a condescension! He sponsored some beggars to write that “I am envious of Akpabio”. Why should I envy a man whose character is luciferous? To envy is to want another’s place, and I can’t phantom becoming like Akpabio who has polarized the State with his nepotism and clannishness. I can’t be capitalistic like Akpabio, and I can’t humiliate my fellow Akwa Ibom people just because I am opportune. In fact, there are many other negative Akpabio in Akpabio that I won’t like to be associated with, hence, the issue of envy of Akpabio is idiotic!

Still on envy, the disjointed article under reference, purportedly written by one Abasiandikan Nkono goes on to state that “on 28 May, 1968 (51 years ago), 53 illustrious sons/political leaders/core intelligentsia of Akwa Ibom origin were publicly slaughtered at Uyo Circus (now Ibom Plaza) before school children – others were killed en masse and dumped in mass graves and ravines around the land for holding a different political view before and during the civil war”, and that the same envy/ hatred is what propelled me to want to “shot down Akpabio by all means”;

Citing John 4:44, the author of that inordinate article seems to suggest that Akpabio is honoured and respected across the country or in other parts of the country than in his home state, and I ask BY WHO? There is a great difference between bought honor and deserved honour. While as the Governor, Akpabio used our common patrimony to buy awards and honours. He received more than 4 Honorary Doctorate Degrees from four Universities across the country. He bought an award from the US Congress Woman, he spent Millions of Naira on Nollywood, etc. He bought awards/honours from Emirs, Obas, Marjet women, churches, Traditional rulers, etc. He funded Nnamdi Azikiwe University, Awka and bought buses for the varsity for awards while our own universities were grown with grasses. Shame on such honours! The bought honours by Akpabio were spells in the eyes of Nigerians, and they’ve long thrown them to the pigs because what is not of God cannot stand.

The Akpabio’s rejoinder also insinuates that whether as Governor or Senator, Akpabio has given people reasons not to forget him. THIS IS TRUE! How can people forget a man who manned a regime where people where killed and kidnapped like frogs? How can people forget in a hurry about 300 people that were kidnapped, and about 40 that were brutally killed between 2007 and 2014? How can we forget that he did nothing to curb the menace of kidnapping and poverty in the land despite Billions of Naira in his control? No, we can’t forget!

It is very insulting for Senator Akpabio, through his conversation with me, and through the sponsored rejoinder, to insinuate that I am sponsored to write against him. How? In the so-called rejoinder, he insinuates that I am sponsored by Senator Akpanudoedehe. This is irrational! From the very first time I met Udoedehe till now he has never sponsored any of my writings. I am a very independent person who doesn’t need help or guidance from anybody. In 2015 I supported Umana Umana (after nomination, though) against Udoedehe’s interest. I stood my grounds, and we parted ways. I write what I feel like writing, but in the best interest of Akwa Ibom people. Senator Akpabio also threatened me that “after insulting him, I WILL WANT HIM TO SUPPORT MY GOVERNORSHIP ASPIRANT IN 2023”. Wow! How does he know who I will support in 2023?

I laughed uncontrollably when I read the paragraph in that disjointed rejoinder that “Senator Udoedehe recently approached Senator Akpabio with a proposal purportedly written by Thomas Thomas, the Publisher of Global Concord Newspaper”. Thank God the author of that rejoinder uses the word ” purportedly”, meaning he is not sure if it’s true. He goes on to state that Thomas Thomas et al, besides pledging a termination of the media attacks on Akpabio, also promised to henceforth take up Akpabio’s reputation management. That I and my colleagues made this proposal due to dwindling sales of Global Concord, and demanded that Akpabio should instead be funding the paper to the tune of N20 Million monthly. That Akpabio turned down the purported proposal and told Udoedehe that he was not interested in 2023 governorship or in Ministerial position. HABA! This is hogwash! Me, Thomas Thomas? Maybe another member of Global Concord has done that without my knowledge, because as far as I’m concerned I see nothing good in Akpabio’s bruised image… I did not get a dime from Akpabio as a Governor, is it now that I will? He should rather keep the money to bribe the EFCC and not me. To hell with his stolen cash!

It is insulting for a man who came to Akwa Ibom Government in a night bus, and allegedly stolen every available kobo and brought down prominent Ibibio sons, to say I came begging for money. I will advise him to always look at the face of any person he deals with so that he will not come to the public and disgrace himself like he does. I will never befriend Akpabio…….