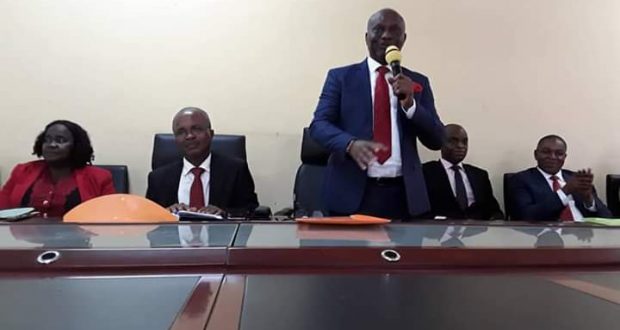 Accountant General Calls for Effective Taxation in the State.

The Accountant General of Akwa Ibom State, Pastor Uwem Andrew- Essien has called for effective taxation for the promotion of sustainable development of the State.

Pastor Andrew- Essien stated this on Thursday, 11th July 2019, while declaring open a – one -day workshop for Heads of Accounts and other charges in Ministries, Directorates and Agencies (MDA’s) of State Government at the ICT center of his office. The Accountant General who expressed worry over budgeting system said” the issue of tax has given us headache, that is why we have brought in practitioners, professionals and implementations, so we can sharpen our skills and also seek the way forward “.

Commenting on the theme of the workshop; ” Effective Taxation For The Promotion Of Sustainable Development “, Pastor Andrew- Essien said the theme was apt, adding that, there was need to ensure effective taxation if the State must move forward. He reminded the participants that as chief advisers to commissioners and permanent secretaries in their various MDA’s, who may not be well versed in taxation matters, it behooves them to ensure they are properly counseled on Taxation matters.

Mr. Archibong said he has enjoyed cordial working relationship with Akwa Ibom State Government and the Office of the Accountant General in particular, describing Pastor Andrew- Essien as a seasoned professional, who knows his onion.

The Coordinator lauded the pragmatic leadership style of Governor Udom Emmanuel led administration noting that “when the righteous is on the throne, the people rejoice “.

The Head of the Directorate of Administration in the Office of the Accountant General, Mrs. Helen George thanked the State Governor, Mr. Udom Emmanuel for approval the hosting of the workshop and challenged participants to make effective use of the knowledge gained at the workshop to contribute positively to the development of the State.