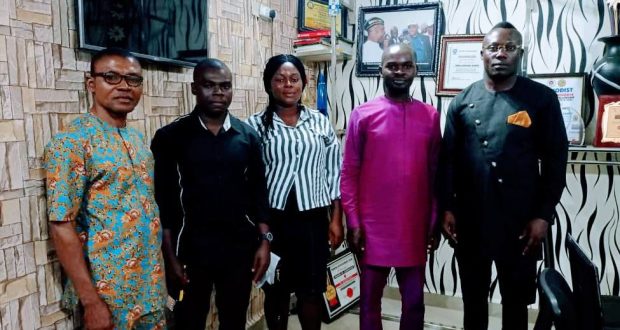 A fastest growing construction firm in Akwa Ibom State with less than five years of operation, has lauded the strong partnership of Akwa Ibom state government in patronising indigenous construction companies in the state.

The Chief Executive Officer of the company, Abaringo Nigeria Limited Dr. Abasiono Okon made the commendation recently in his office in Uyo, when he played host to the New Year Get-together and Thanksgiving Planing Committe of the Nigerian Union of Journalists (NUJ), who paid him a courtesy visit, to officially invite him to the annual spiritual convention of the union.

He said, “it is quite obvious that the governor has really carried indigenous construction companies along, by offering them jobs, unlike the previous administration which normally make use of Julius Berger”

The CEO commended the governor for given them a platform to leverage on and showcase their potentials, thereby building capacity and competing with their counterpart in the western world, noted that Hensek construction company is one of the best indigenous company handling major construction jobs in the state, thanked governor Emmanuel for the confidence repose on them.

Okon disclosed that Abaringo is making waves because of the patronage enjoyed by the state government to execute some of the projects, promised to continue in delivering standard and quality jobs that will stand the test of time. “We have a lot of offers, like sub contracts, even direct contacts, some building when we look at it critically we decide to manage the intergrity of our company the way it is than to get involve in any job just to make more money that would affect the image of our company.”

The Ikono born philanthropist used the occasion to appealed to members of the fourth estate of the realm to use their respective platforms and the forthcoming NUJ Thanksgiving to reinforce government and multi nationals of indigenous construction companies capacity to deliver on any given tasks using Hensek as the benchmark.

Dr. Okon assured the committee of his unflinching support for the upcoming event, said he has always do his best to enable journalists advance journalism practice in the state.

He explained that, indigenous firm can also deliver quality services if given the opportunity, said his company with just few years of operation has delivered top-notch road construction within and outside Akwa Ibom State.

Effiong, commended, Dr Okon for being the first to received the planing committee, since it was inaugurated, thank him for using Abaringo Nigeria Limited to create a brand of distinction by consistently delivering and maintaining top-brass quality engineering works and standards.

“Our union has noted with immense happiness that Abaringo Nigeria Limited is one of our best indigenous civil engineering companies that can be trusted.” pleged to support the company’s vision and growth.

The Thanksgiving which is slated for January 16 at Catholic Church,Ikot Ebre, Ibesikpo Asutan LGA, has as its Themed; Guide Me Oh God On The Path Of Peace, Luke 1:78-79. On the NUJ Team were Comrade Emmanuel Sampson, Blessing Asuquo and Victor Essang.