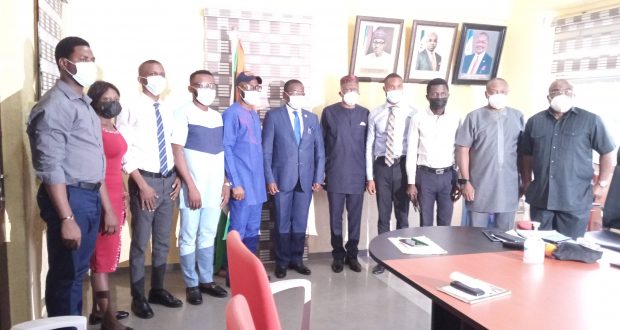 The Akwa Ibom State Medical students Worldwide under the leadership of Comr Utomobong Udo has described Commissioner for Health Prof. Augustine Vincent Umoh as a leader of tested ability, sound judgement and keen perception whose fine and adorable character and leadership qualities have stood him out as one of the best leaders of our time, hence his performance.

The Medical Students body gave the commendations yesterday, Thursday, 15th July, during a courtesy call on him at the Ministry’s Conference Hall, Idongesit Nkanga Secretariat.

Udo who describe the visit as a home coming, expressed delight in what he described as bunch of intellectuals among Akwa Ibom doctors. Said Professor Umoh’s appointment came as a blessing to Medical Students , having seen his tremendous track records even as Chairman of the Nigeria Medical Association, and a Former Provost of The College of health Sciences in the University of Uyo were he worked assiduously in repositioning the sector for efficient and quality service delivery.

Udo, however said the young and intending health workers came to identified with the health Boss, seek areas of collaboration and synergy, obtain professional advise and discuss sundry issues that could move the association forward, as well as tapped from his wealth of experience on the rudiments of Health practices to be fully equipped for the tasks ahead.

In his response, the Commissioner for Health, Prof.Umoh praised and lauded the foresight of the president for demonstrating capacity, showing leadership and leading the Medical Students in the right path, while pledging his total support on his part to produced doctors that will provide quality services to the people.

Umoh, noted that medical Education is a task of commitment and focus, advised the student doctors, not to be overwhelmed by the benefits accrued to unionism but considered their studies as the primary thing that will unlock their potentials into the Medical profession.

He reiterated that the revitalisation of healthcare facilities in the state was as a result of the governor’s resolve in prioritising health sector since he came onboard as the governor.

Umoh Stressed the need for a strong collaboration between Students doctors and those already practicing to help send out sound and traind doctors who will not compromised the tenet of the profession after graduation.

He assured the Medical students, that Governor Udom Emmanul will soon look into their plight of Medical grant and other privileges that should be enjoyed by the student doctors as soon as the financial climate is favorable.

At the meeting,the student doctors briefed the Commissioner on the proposed health and accedemic summit that’s coming up September, which will give them opportunity to present some Medical equipments to the needy students who can not afford it as well appreciate their teachers for training succession of doctors over the years of which the commissioner described it as a worthy cause and promised to support the event to succeed.

High point of the visit, was the presentation of award of Excellent to Prof. Umoh, recognition as a patron of the body and presention of Exercise books in preparation for the summit.

The Health Boss during the visit was flaked by the immediate past Commissioner for Health, who doubles as Special Adviser to The Governor on Health Matters, Dr Dominic Ukpong.
Dr. U. David Udoumoh, Chairman Hospitals management Board, Akwa Ibom State. Permanent Secretary Ministry of Health, Dr. Patrick Essiet.

Others include, Dr Ntiense Umoette, The State Epidemiologist, Director of Information, and other Board of Directors in the Ministry, among others.

The president was accompanied by The General Secretary Comr Kufre Akpan, Chief of Staff and President of Naakims Uniuyo ,Elijah Ukpong, SSA on General duties/ Chairman Accedemic ,Daniel Akpan,S.A. on Project Wisdom Emanuel among others.