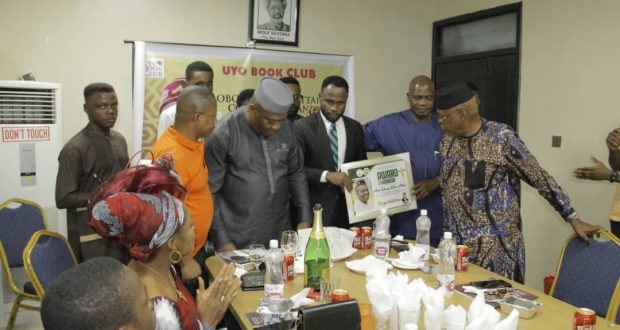 A’ IBOM MEDICAL STUDENTS CELEBRATE GOV. ATTAH @ 83. … Appreciate him for instituting the payment of Medical grant

The National Association of Akwa Ibom Medical Students Worldwide were fully represented at the 2nd Colloquium to Mark Gov Attah @83 as put together by The Uyo Book club.

Setting The tone for the Celebration, The Founder, Uyo Book club Dr Udeme Nana, described Obong Attah as a detribalized leader who came to Lay a solid foundation that remodeled Akwa Ibom State to becoming a modern city; hence the reason he is called the “Father of the Morden Akwa Ibom”

Dr Nana ,who was the first appointee of the Legendary Attah as Chief Press Secretary in his early 30s said Akwa Ibom needs a leaders who Will fit into the mould of Obong Attah, adding that Obong Attah was selfless and passionate towards the common good of all Akwa Ibomites.

Delivering The 2nd Colloquium lecture, The Former Commissioner for Land and housing during Gov Attah’s administration, Arch Okon Obot , noted that Gov Attah is a living Legend that must be celebrated everyday and not only in his birthday. He described the Architectural designs and remodelling of the State, and building of Shelter Afrique as some of the achievements which distinguished Obong Attah out as a master planner.

Also highlighting on The positive achievements of Obong Attah, the fomer Commissioner in the State Mr Ekong Sampson, also patron of Uyo Book club, said we should always endeavour to celebrate Obong Attah.The former Law maker described Obong Attah as an Elderstateman and added that it was his visionary leaderships style that stood him out. He also, appreciated Uyo Book club for organizing The 2nd Colloquium in his Honour.

The President of Akwa Ibom Medical Student, Comr.Utomobong Udo in his address said he was moved with a Sense of responsibility to celebrate Governor Attah whom he described as a selfless and a humble leader who accommodated everyone no matter their status.The President noted that doctors now doing very well in Akwa Ibom State today was due to the ingenuity of Governor Attah who approved and instituted the payment of medical study grant for Akwa Ibom Medical Students during Dr Isreal Ben Led administration; A gesture that stood him out as a leader who is committed to the overall success of all Akwa Ibomites, and the very essence the executive members of the association were there to honour him. He Presented an awad of Honour as Pillar of Medical Education on behalf of the associations to the Former Governor and prayed for long life for him.

Receiving The Award on behalf of Governor Attah,The honourable Commissioner for Environment in Attah’s administration, Barr Joe Ukpong, thanked the Medical students for recognizing the efforts of Governor Attah in ensuring a bright future for doctors. Barr Joe Ukpong who described Obong Attah as a pathfinder said Attah is already aware of The Honour done to him by the student doctors and was so excited about the gesture.

Others who join in paying tribute to the Former Governor were Obom Tony Esu, Mr Efo and Mr Samuel Ayara of Akbc among others. High point of the celebration was the cutting of cake to mark the oc​to​ge​nar​i​an’s birthday.