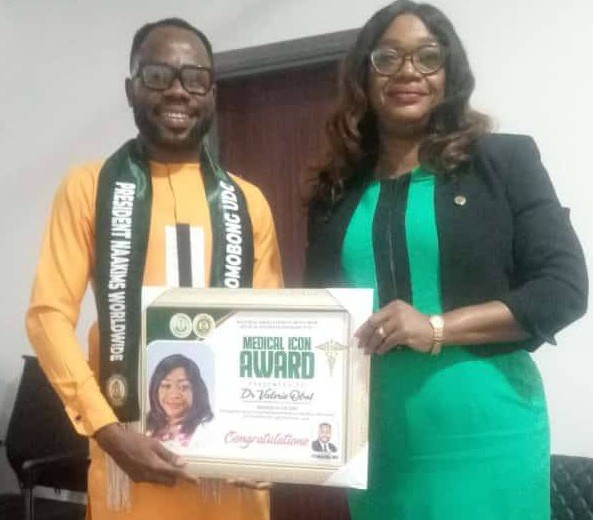 …bags award of mentorship from Naakims

The Permanent Secretary, Ministry of Power and Petroleum, Akwa Ibom State, Dr Valerie Obot has Commended the leadership of Akwa Ibom Medical Students worldwide for always demonstrating determination, competence and professionalism in discharging their duties, having the interest and welfare of the Associations at heart.

Dr.Obot gave the commendation recently when the leadership of the association led by The President Comr. Utomobong Udo, paid her a courtesy visit in her office as part of activities to mark and celebrate the association at 20.

Dr Obot herself a medical Doctor trained form the University of Calabar, said the Medical profession is a noble profession, and at the same time a calling that does not necessarily require the most brilliant students in the society but rather requires students who are willing to be committed to their studies with a determination to succeed both while in school and after graduation.

The former Permanent Secretary, Ministry of Education, however called on all future Doctors to aspire to attend the highest educational level in the profession and also encouraged them to explore the various career opportunities available to them upon graduation, noting that it’s only with these that a bright future in the profession can be guaranteed.

The President of Akwa Ibom Medical Student, Comr Utomobong Udo in his address said they came to give Honour to whom Honours is due, describing Dr Valerie Obot as the “pride of medical profession in civil service and Government” and also noting that she has been a role model and inspiration to the medical Students, especially the female folks who aspire to be like her in future.

The President conferred on the Permanent Secretary a Medical Icon Award as a Mentor of Doctors and Medical Students in recognition of her outstanding contributions to the success of the association as the association marks her 20 year anniversary.

Receiving the honour, the highly elated Permanent Secretary, described the honour given to her as a gesture she values so much, noting that she will always support the association whenever the call arises. On the magazine publication, Dr Obot Obot described it as a good move that will project the image of the association to greater heights.

Others who spoke were the editor in Chief of the Medical Students Magazine, Uwem Akwang, and the Vice President of NAAKIMS Worldwide, Comr. Anthony Anthony who gave a vote of thanks and appreciated Dr. Obot for the audience granted to the members of the association.