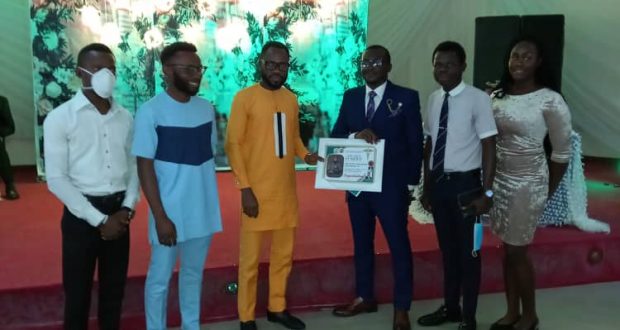 History was made yesterday 20th September, 2021, as an Akwa Ibom son, Dr. Emediong Saturday Etuk emerged the overall best Doctor at the 52nd oath-taking of the University of Calabar.

The colourful event which took place at the University international conference center, had in attendance, the CMD of University of Uyo teaching hospital, Prof. Ememabasi Bassey and the provost of the College of health sciences, University of Uyo, Prof. Etete Peters. In attendance also were the Vice chancellor UNICAL, Provost college of medicine, Lokoja(Sponsio lecturer), NMA Chairman, Cross River State, Provost college of medicine UNICAL, All Deans of faculties in the college, Professors and medical elders, all HODs, parents of the graduating Doctors and the Registrar of the Medical and Dental Council of Nigeria (MDCN).

The Registrar of MDCN, Dr. T.A.B Sanusi, with supports from the Provost and medical elders, administered the Hippocratic oath to all graduating Doctors, beseeching them to always abide by the code of conduct and ethics of the medical profession.

As part of activities to celebrate our Akwa Ibom Doctors, the NAAKIMS WW President, Comr. Utomobong Udo, together with the Academic Commitee Chairman, Sen. Daniel Akpan were on ground to receive the 23 Akwa Ibom graduating Doctors back home. Presenting an award of merit to the best graduating Doctor, Dr. Emediong Etuk, an indigene of Oruk Anam LGA, the NAAKIMS Worldwide president described Dr. Etuk as a bundle of intellect whose hardwork had paid off handsomely.

The President, who also represented the chairman of Akwa Ibom State NMA, extended his congratulatory message to Dr. Etuk, stating that he has made the state NMA proud for setting such an academic record. The President who presented certificates of excellence to all the 23 New Doctors of Akwa Ibom State expressed happiness and joy on their success, noting that their hardwork for over 7 years had yielded good success.

The president further extended the congratulatory message from the Hon. Commissioner of Education Mrs Idongesit Etiebiet and that of the health counterpart Prof Augustine Umoh as well as that from the first female patron of the association and Commissioner of Agriculture/Dean of Commissioners Dr. Glory Edet, noting that they have made the state proud and assured them that the Government will receive them in a bigger capacity.

Responding on behalf of the graduating Doctors shortly after receiving his award, Dr. Emediong Etuk thank the NAAKIMS president and his delegation team for the honour done him and described it as first of its kind. He thank the NMA Chairman and all the patrons for the honour and promised to come back to the state to offer their services.Goodwill messages were received from Prof. Ememabasi Bassey, CMD of University of Uyo teaching hospital and Prof. Etete Peters, Provost, college of health sciences, University of Uyo, whose daughter, Dr. Edidiong Peters was among the graduating students.