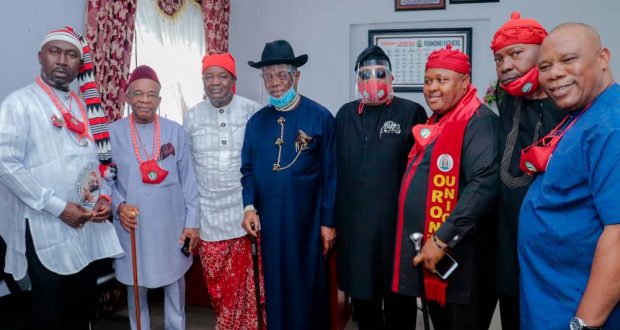 The Akwa Ibom State Chapter of the All Progressives Congress (APC), has suffered a setback, following the return of a prominent chieftain of the party in Oro nation , Ikpoto Okon Osung to the Peoples Democratic Party (PDP) on Saturday, August 29.

The former National Vice President of the Nigerian Union of Journalists (NUJ) who was received by the State Vice chairman 2 of the party, Rt Hon. Godwin Okponung with other PDP stalwarts at Oron Civic Center, said he is happy to be back home, ” I am happy to return to my home, the umbrella body. I have learnt so much about the APC, we must change the political direction of this country, our political environment is highly polluted with bad governance, and PDP is the only party that can liberate the people “.

Osung who is the pioneer Chairman of Nigerian Election Monitoring Group (NEMG) withdrew his membership from PDP during the 2015 general election promised to join forces to ensured the party bounced back to power come 2023 at the National, explaining that PDP is a religion not only in Akwa Ibom but in Udung Uko.

The returnee assured Governor Udom Emmanuel of his total loyalty, support and honesty in the development of the party, while urging others who are still trapped in the APC to come to PDP for freedom, justice and development.

The Udung Uko born politician further maintain that his sojourn with the APC has been an exercise in futility as the party in the state, lacks Physical structures and has failed Akwa Ibom people, hence necessary for him to return to the PDP.

He lauded Governor Udom Emmanuel strides in repositioning and engendering developments in the state most especially in the aviation industry with the birthed of Ibom Air, which according to him has exposed Akwa Ibom to international destinations.

In his remarks the Chairman of the occasion, Chief Ndueso Essien noted that the event is to receive back a strong and supportive son who has played active part since the inception of the party.
“Chief Okon Osung is a big fish, the PDP is a big ocean that can contain all fishes in Akwa Ibom, the only active party is the PDP, i know if Osung is given opportunity he will perform tremendously, PDP is waiting to receive as many as possible those who have turn a new leave “.

On his part, the father of the day who doubled as Special Guest of honor, His Excellency Otuekong Idongesit Nkanga, said there must be joy at any given time, ” Today there is joy in Oron, my advice to politicians is to remember the people who elected you. when you are holding a public office, take something back home. If you cannot, you are not worthy of the office. If the party you belong to does not value your service, you do not have any reason to be there, Ikpoto, welcome back “.

Similarly, Senator Akon Eyakenyi in her goodwill message said the broom party has ended in fiasco in Oron. She commended the large crowd that came to witness the event, saying it is an indication that Oron people desires a leadership that will improve their well-being.

High point of the occasion was the receiving of Chief Okon Osung by the five Chapter Chairmen from Oro nation and the presentation of a customized PDP cap and umbrella to the returning member.
The event was attended by President of Oron Union, Bishop Etim Ante, Commissioner for Women Affairs, Dr. Ini Adiakpan, Hon. Frank Archibong, Commissioner for Local Government and Chieftaincy Affairs, Senator Anietie Okon, Senator Etang Umoyo, Ambassador Assam Assam, and other creme de la creme from the political class, youth groups, and women groups.