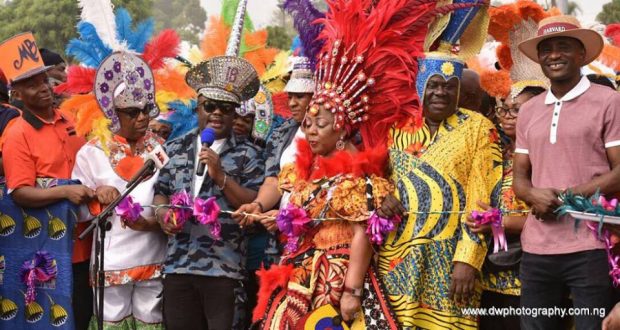 A Flop Of A Carnival As Passion 4 Emerge 2017 Winners

The Passion 4 Band has emerged as winners of the 2017 Carnival Calabar.

The Carnival despite having the largest crowd ever, has been viewed widely as a flop.

The state’s event tourism flagship event which was billed to be flagged off on Thursday by 10:00 AM at the millennium park, 11-11 roundabout did not begin till past 4:00 PM with Governor Ayade seeking more will from African leaders to end the scourge of migration.

Trouble begun when an announcement on Wednesday night said all bands were now to muster at 11-11 roundabout instead of the welcomed idea of having the five competing bands; Passion 4, Bayside, Freedom, Masta Blasta and Seagull mustering at five different points along the 12 kilometers Carnival route which meant everybody will see at least three performing bands within four hours.

As at 12:30 AM, the first non competing bands had arrived the U.J Esuene stadium and by 6:00 AM, Passion Four was yet to perform as all the revellers were either tired, frustrated or too weak to continue.

Pop sensation, Patoranking is said to have threatened to leave when he was called on stage to perform and after his performance, nearly 80 percent of the audience departed leaving a scanty stadium for Passion 4 to entertain.

However, as at past 7:00AM, Mr. Gabe Onah who heads the Carnival Commission came and announced them winner with only a few people jubilating.

Mr. Onah did not comment on the reason the Carnival lasted so long as a reveller in Passion 4 told this reporter that she has been awake for 25 hours as at 8:00 AM Friday morning.

Comments monitored on social media have condemned the organization of this year’s Carnival Calabar.