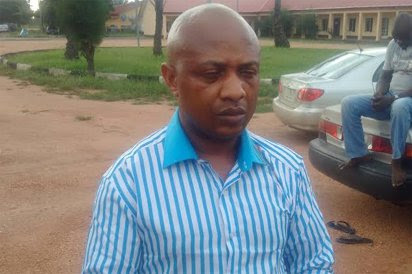 How Much Ransom He Collected From Them

The notorious kidnapper arrested at the weekend, along with six members of his gang in Lagos, by police operatives from the intelligence teams has named some of his victims.

Chukwudidumeme Onuamadike, alias Evans, told detectives that though he could not remember the number of people he kidnapped or the amount of money he collected as ransom, he was, however, able to mention a few.

In Edo and Lagos states, he remembered kidnapping Mr. Mbarikatta William Uboma at Festac Town on June 16, 2012, where the sum of N20 million was collected as ransom before he was released. A police classified document containing Evan’s confessional statement revealed that Mr. Paul Cole from Ohafia in Abia State was also kidnapped by the gang on August 23, 2012, at Festac Town where N20m was also paid.

Mr. Mohammed Jamal, a Lebanese, who was kidnapped on August 19, 2012, at Ajah, paid N17m at Ojo area of Lagos to regain his freedom.

Evan’s gang also kidnapped Mr. Kingsley Nwokenta on September 19, 2012, after he left Lebanon Bar in Festac Town and he had to pay N15m in addition to his black Toyota Venza car that he forfeited to the gang before he regained his freedom; just as the gang also claimed responsibility for the kidnap of Mr. Anthony Ozoanidobi on October 10, 2012, along Marwa Road in Satellite Town where N15m was paid before he was taken to Apple junction, Amuwo-Odofin in Lagos and released.

Evans further stated that his gang also kidnapped Mr. Leo Abraham in Lagos on August 20, 2012, and dumped him at Badagry Road in Lagos after he paid N15m.

However, Ojukwu Cosmas, who sells Toyota parts at Aspanda Trade Fair, who was kidnapped on January 21, 2016, at Festac Town was not too lucky as he had to pay $1m to secure his release.

James Uduji who was kidnapped by the gang at Seventh Avenue, Festac Town late last year paid $1.2m after being held for six weeks before he was released, while Chief Raymond Okoye Odu-Na–Ichida who was kidnapped in 2015 also paid $1m to regain his freedom after two months in captivity.

Francis Umeh, a spare parts dealer at Aspanda, was kidnapped in July 2016, at Raji Rasaki Estate and released after paying $1m to secure his release.

The gang, however, recorded a fatal loss when in 2013, in its attempt to kidnap Chief Vincent Obianudo, the owner of Young Shall Grow Motors, met with stiff resistance from the policemen attached to the chief. The police opened fire and killed two members of the gang.

Though the gang also killed a policeman and some of its members escaped, Chief Obianudo, who sustained bullet wounds during the attack, survived after several surgeries.

The last known victim of the gang in Lagos before it was smashed is Mr. Donatus Dunu, a pharmacist and importer of drugs, who was kidnapped on February 14, 2017, in Elupeju area of Lagos. The sum of N150m was paid by the victim’s family to secure his release, but Evans collected the money and refused to release the victim, insisting that an additional N300m must be paid.

The gang regretted that Dunu escaped from Evans’ detention camp in Igando on May 12, 2017, without paying the additional ransom.

In Edo State, the gang kidnapped Mr. Ohunyon Ernest in November 2011 and he had to pay N85m, just as Mr. Dan Odiete who was also kidnapped by the gang in Benin City in 2013, paid N100m to regain his freedom.

The owner of Uyi Technical who was kidnapped by Evan’s gang in Benin City in 2013 paid N100m before he was released, while Tom, kidnapped in Benin in 2012, paid N100m to the gang.

The owner of Kings Paint was also kidnapped in Benin City in 2010 by the same gang and had to pay N40m to regain his freedom even as Mr. Randeki, who was kidnapped by the gang in 2010 paid N30m for his release.

Evans, who was nabbed by a combined team of police officers and men from the Intelligence Response Team (IRT) and the Technical Intelligence Unit (TIU) at his private residence in Magodo, Lagos, on June 10, was described by the police as a very intelligent suspect.

Other members of the gang that were also arrested at different locations include Felix Chinemerem, 36, from Arochukwu in Ohafia Local Government Area of Abia State, and Nwosu Chikodi Chukwuma, aka Sudo, 42, and is said to have over 20 years experience in armed robbery and about eight years experience in kidnapping.

Other arrested members of the gang are Uchechukwu Amadi from Anambra State who the police described as the head of Evans’ detention camp, a female, Ogechi Amadi, said to be the woman that rented the house and cooks for the kidnappers and their victims in the camp.

The rest are Suoyo Paul, aka Nwana, 42, a native of Bayelsa State, and is said to be the one supplying the gang with rifles and ammunition, while Ikenna Emeka, 28, from Anambra State, said he participated in four kidnappings in Festac Town with Evans before Evans sacked him from the gang for stealing an expensive wrist watch and a ring from a victim without informing him